If you like football, being the best, and competing against other players, “you are in the right place“, as 1xBit would say.

1xBit presents the most rewarding football competition of the season, the BIG 5 betting event.

The BIG5 betting competition has been designed specifically for football fans worldwide, so you would be able to show your skills and get your share from the 5 BTC prize pool. 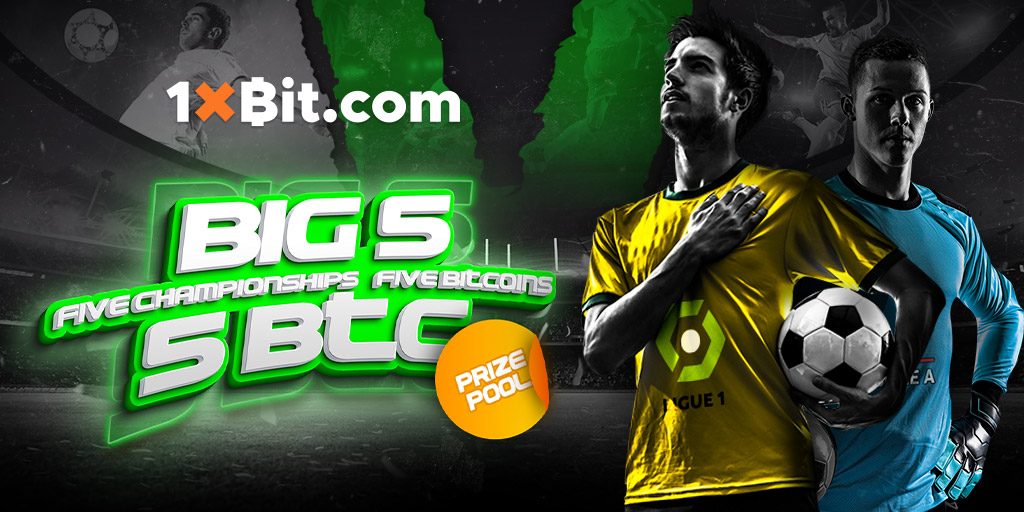 How to participate in the BIG 5 Betting Competition

All you must do is place bets on football matches from Europe’s Top 5 leagues: The English Premier League, the Italian Serie A, the German Bundesliga, the Spanish La Liga, and the French Ligue 1. Moreover, you must know what kind of wagers qualify for the BIG 5 competition. You can bet on any of their available markets. The minimum accepted bet is 0.2 mBTC and odds of 1.5 and higher.

The steps to be followed are below:

You earn promotional tickets for each bet you place: the more tickets, the better chances to have a lucky one among them. If you enjoy betting on football and winning incredible prizes, you should know that 1xBit has set a prize pool of 5 BTC (over $200,000), and your possible rewards are impressive. The prizes will be drawn monthly, at the end of the championship, and there will also be a grand finale prize.

During every month of the football season, players will accumulate promo tickets. Once the month ends, 1xBit will hold a draw for all promo ticket holders who placed bets on matches in a particular league. Fifteen lucky winners per month will be drawn and rewarded with 15 mBTC.

A second draw will be held for promo ticket holders who placed bets on Europe’s five strongest leagues (Premier League, Serie A, Bundesliga, La Liga, and Ligue 1) when a football league ends. Fifteen random winners who fulfilled the conditions will be rewarded with cryptocurrencies of up to 50 mBTC per league. Five leagues mean that we will award a total of 75 bettors.

Hold your horses because that is not all! 1xBit will organize one additional draw. All promo tickets received for the entire BIG 5 betting event will be put inside the same pot. From there, they will draw ten other winners, who will be awarded prizes of up to 500 mBTC and other magnificent rewards!

Why Should You Bet with 1xbit?

For joining the BIG 5 betting competition there will be a Welcome Bonus of up to 7 BTC, which will be offered to all new players.

Aside from that, the site allows multicurrency crypto accounts, allowing users to choose from any of the platform’s 35+ cryptocurrencies available for depositing and withdrawal with 100% anonymity.

There is even more to accomplish on the 1xBit platform because they provide various services and goods. 1xBit customers can gamble on over 35 sports, including popular ones like football, basketball, and tennis.

They hope to provide the ideal environment for everyone through their services while maintaining the player’s anonymity and giving fast payouts. Earnings are put directly into the user’s account without processing or waiting.

If you enjoy betting on football and winning incredible prizes, register your account today. Buy more tickets and you will have higher chances of winning! Follow 1xBit on social media to stay up to date on all their announcements: Twitter, Instagram, Youtube, Telegram.