The opening of the year 2022 will find out what speaks for a bull and what a bear market, and how extreme these can be this year. In the second part, we look for reasons for prices to fall.

Not everyone will like to hear this, but there are a few reasons that speak for us to have to spend 2022 in the bear market. So reasons for prices to fall for a year or two or more until we are all tired and exhausted and give up. I will introduce you to the nine most important reasons.

The double top is a chart formation that manifests itself by two repeating peaks. If you look at the peaks Bitcoin made in May and November, we have a course that looks a lot like a double peak. 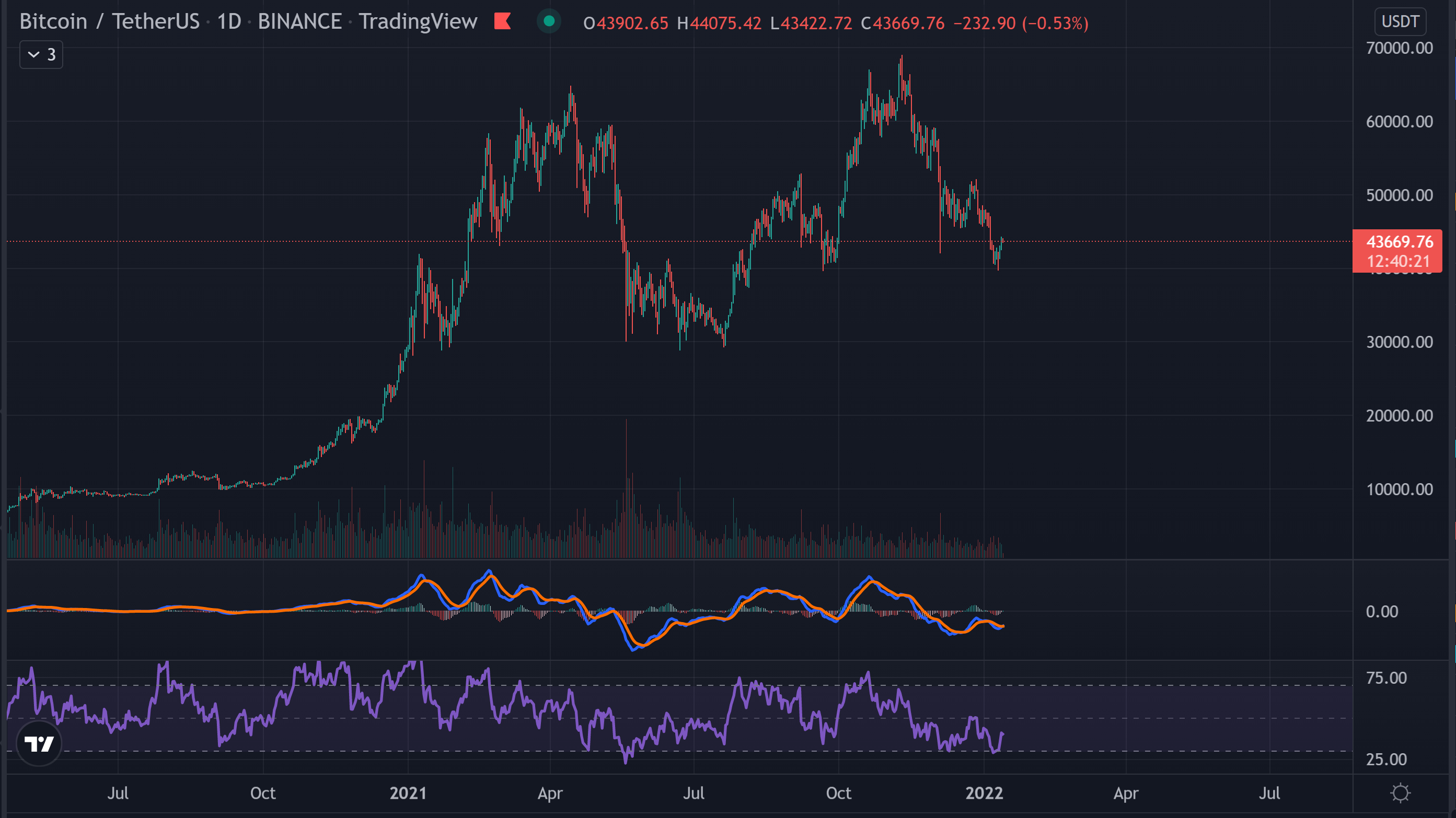 In the technical analysis, the double top as Investopia writes, is an extremely bearish technical reversal pattern that forms after an asset spike twice in a row with a moderate decline between them.”

A “real double top” is extremely pessimistic. It “can lead to an extremely sharp relegation.” However, it has not been decided that a double top really exists. It has yet to be confirmed. To do this, “the price must fall below a support level that is at or below the low between the two highs”. For Bitcoin, this would be a price of around $28,000. Until then, the price has to fall a little longer.In addition, Bitcoin forms an unclean double top: the second high is a bit higher than the first. If the second low remains higher than the first, i.e. the price does not fall below the support level, the formation would even look relatively optimistic.

Usually a trend reversal is heralded by a volume spike. The price is racing towards its peak, there is an incredible trading volume – and then the trend is reversed, the bubble bursts, the price falls almost vertically.

On the other hand, the price usually hits the ground with fireworks, it collapses, and suddenly the market buys what it takes because Bitcoin is too cheap, and the price bounces back up.

This is also called “surrender”: the bears surrender because they give up hoping for cheaper prices, the bulls surrender by realizing their losses.

That hasn’t happened so far. Instead, the volume is actually falling, which, according to volume theory, suggests that prices will continue to fall. Perhaps we will see a trend reversal in 2022. But if you follow the volume analysis, it is not there yet. 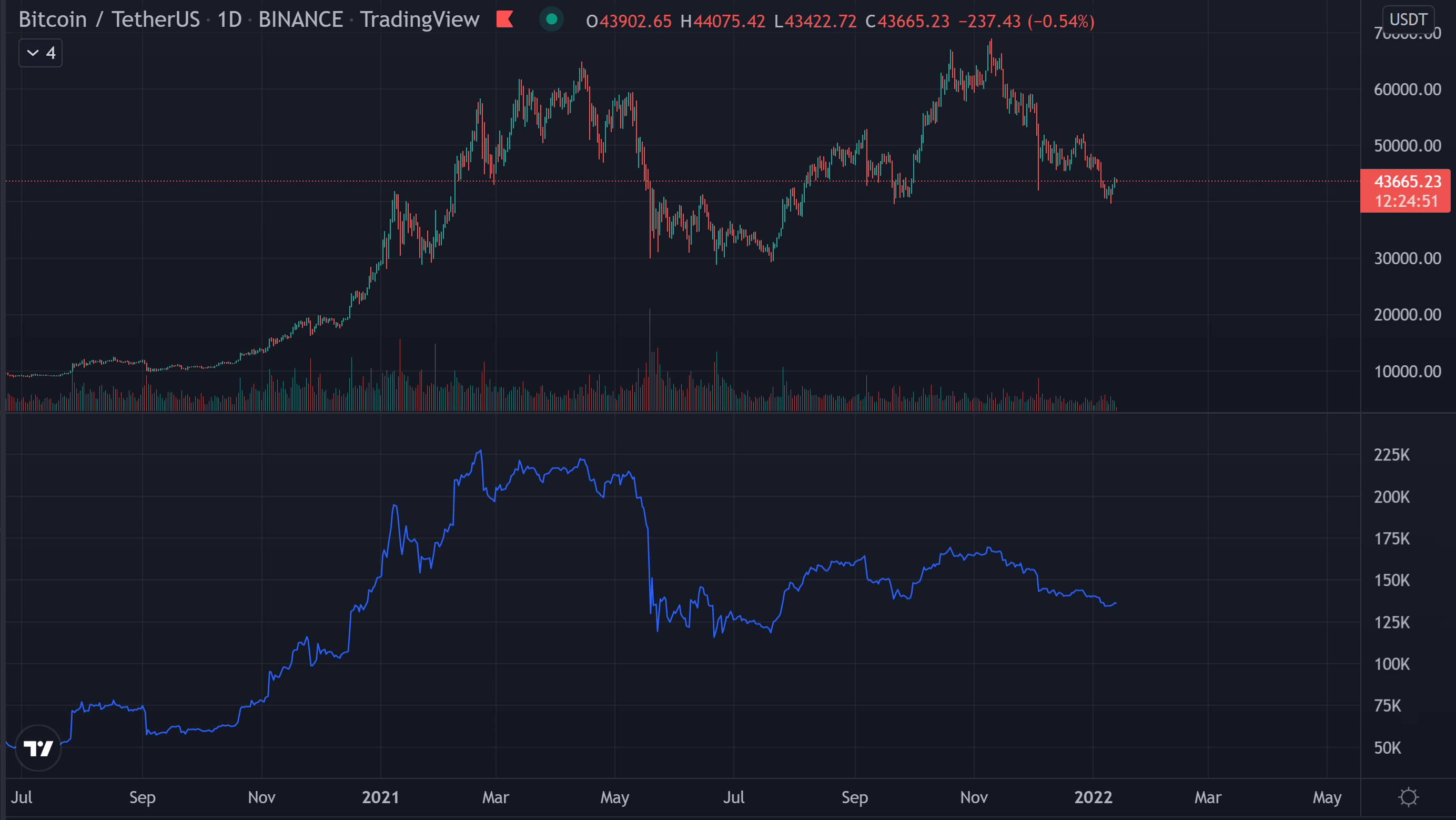 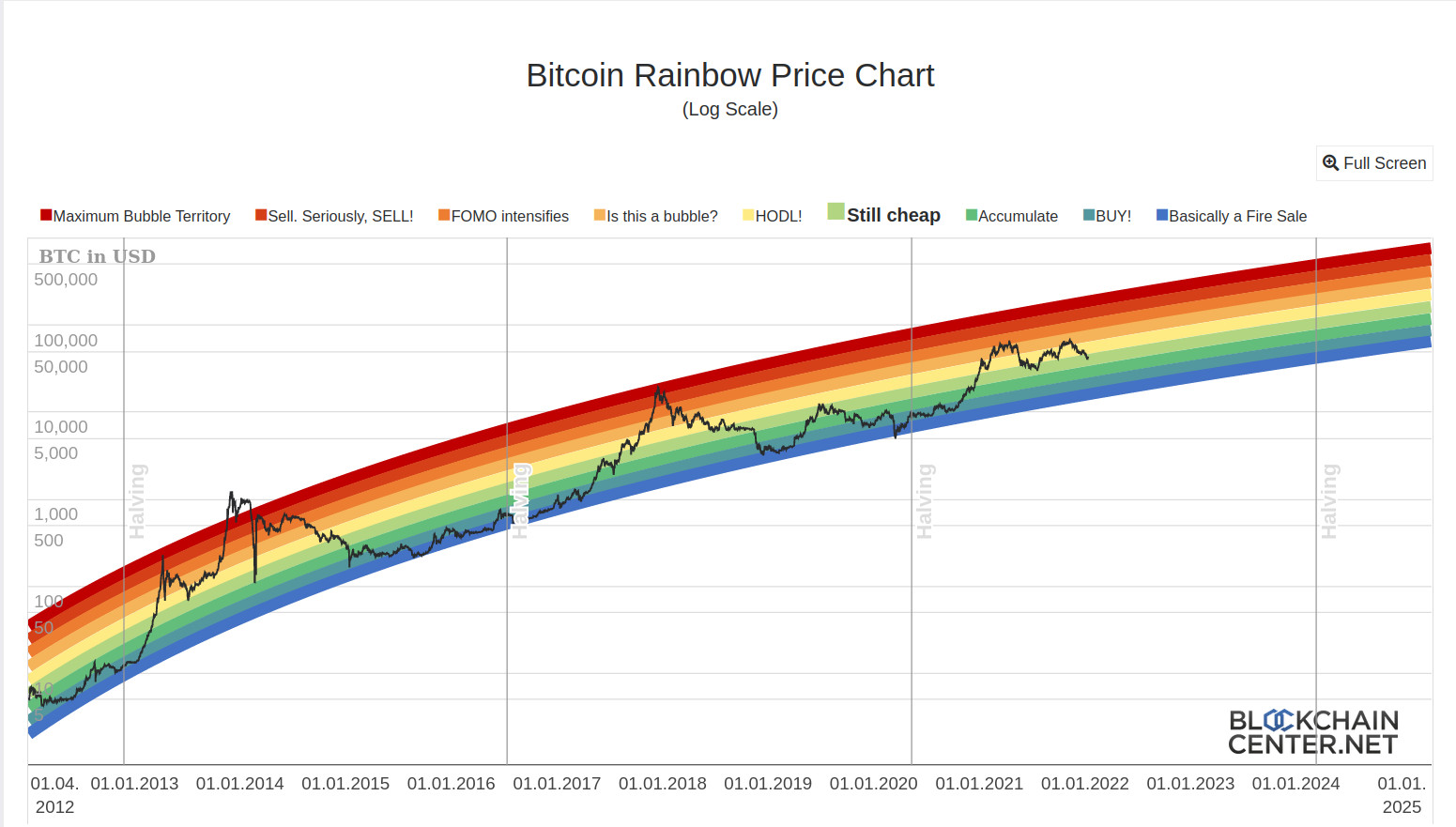 The rainbow chart from Blockchaincenter.net .

With Bitcoin, the change between bull and bear market is part of the rhythm of every halving cycle: some time after miners have halved the output of new Bitcoins, the bull market takes hold and strives for a new peak. That can happen after half a year or after a whole.

The price is approaching the red stripe on the rainbow chart. The trend reversal begins after a third or at most half of the halving epoch. The price falls until it lands in the blue stripe.

According to the logic of these cycles, it would be more appropriate if we now fell into a bear market and set out in search of the bottom than if the price only now started to form its real top.

4.) Stock to Flow has virtually failed

Since around 2016, the stock-to-flow (S2F) model has been the hottest modeling of the Bitcoin price. The model, which is based on an indicator for raw materials and scarcity, reproduced the course of Bitcoin almost too perfectly.

This year, however, it became clear that the forecasts of the S2F model are too optimistic even for the crypto market. Bitcoin should have reached $ 100,000 in 2021 “in the worst-case”. But he hasn’t, and he’s not even halfway out of the year.

Of course, you can stretch the stock-to-flow model. You could say it just has to stay the course over the long term, and it doesn’t matter the few months that Bitcoin falls out of the channel. That is roughly what the apologists of the S2F model do. But that doesn’t change the fact that the model and its optimistic forecasts have lost a lot of confidence.

We presented the unicorn index yesterday. He’s still very high at 90, including 21 super unicorns with more than $ 10 billion in market capitalization. Are all of these projects really worth that much?

Do we really need around 20 “Ethereum killers” – that is, alternative smart contract platforms – all of which have unicorn status? Didn’t coins like Dash, Bitcoin SV, eCash, Zcash, EOS, Tron, Tezos and XRP show for a long time that they have so far failed to gain relevance as money and will probably continue to fail in the future? And how can it be that so many DeFi applications, even if they are on a side chain, become unicorns after such a short time?

Perhaps among the 84 unicorns there are some unexpected pearls, coins that are currently in the low single-digit billions, but can also be in double digits. But most certainly, numerous unicorns are useless in the sense that they do not have an ecosystem large enough to warrant the unicorn rating.

In order to reach the ground, unicorns have to die. If the bear market doesn’t reach Bitcoin and Ethereum – it will attack many unicorns.

6.) There was no second Tesla, Microstrategy and El Salvador

There was no second X: After Tesla, no world-class company has added Bitcoin to its portfolio to any significant extent. No medium-sized company has definitely accumulated bitcoins according to Microstrategy. No other country has made Bitcoin the official currency after El Salvador.

It is possible that what promised to be a starting shot remains a single event with no successor. The currently falling price makes this likely – companies and nation states do not like to reach into falling knives.

7.) With China, a powerful market has not collapsed, but has clearly shrunk and de-dynamized

During the 2020/21 bull market, China banned the last legal varieties of crypto trading and mining. It is true that mining continues “in the underground” and there are still ways to trade in cryptocurrencies.

But the market is smaller, less open, and players have much less room to grow. China is unlikely to be the locomotive that powers the crypto markets anymore. That should not be underestimated. The potential market for Bitcoin and crypto has never been smaller than at the beginning of 2021.

8.) The regulatory situation is entering a delicate phase

The first countries are starting to implement the FATF’s travel rule. The travel rule essentially means that privately hosted wallets should no longer be allowed or only allowed under strict conditions.

In Germany , this manifests itself in strict disbursement procedures for exchanges and wallets, even if it has not yet been decided in detail. In South Korea , exchanges will no longer be allowed to pay out coins to privately hosted wallets from the spring. A de facto complete ban on private wallets will soon come into force in Estonia .

This most unpleasant and biting wave of regulation to date is expected to sweep the world in 2022. It threatens to undermine what makes crypto so groundbreaking: autonomous access to digital money. If this regulation succeeds – that is a very big if – it could pull a tooth out of Bitcoin and crypto, which has so far been decisive for success. This threatens to permanently damage the ecosystem.

The Fed is ready to raise interest rates in order to fight inflation, the ECB is still hesitant, but cautiously recognizes that inflation is a little higher than intended.

Central bankers are slowly becoming aware that the spirits conjured up by their monetary policy can also turn against them. If they take countermeasures, this will stop inflation or it will not stop them because the price development may already have gained momentum that will grow into wages via the supply chains. But if the central banks raise interest rates, and if it’s only the Fed, then non-volatile and fixed income investments become more attractive again and capital drains away from riskier investments like stocks and bitcoin. This could also be felt in the price.

With these nine reasons, our bear market case ends. Tomorrow we’ll turn the game around – and present nine reasons for a bull market.

You may be interested to read about the dollar cost averaging strategy so you are not in max pain buying highs and are not left behind if the crypto market pumps.