Tokenized versions of Bitcoin keep winning over new holders of the queen cryptocurrency. Indeed, the value of bitcoins evolving on the Ethereum network has just passed one billion dollars, following an 89% increase in the number of BTC tokenized since September 1.

In total, more than 98,000 BTCs have “changed” the blockchain to be represented on Ethereum, or 0.47% of the total supply of Bitcoin.

The WBTC of BitGo is used the most, with 69,624 BTC tokénisés. However, it shows a certain centralization, and alternatives, such as renBTC or imBTC, have emerged. Unfortunately, they fail to match the WBTC and are only the origin of 20,000 tokenized BTC.

DeFi as a driving force

It has now been several months that, each in turn, DeFi protocols integrate tokenized versions of Bitcoin. As a result, it is now possible to take out a loan on MakerDAO, Compound or Aave using BTC as collateral. In addition, we can generate interest on this collateral.

For its part, Uniswap, which has just launched its UNI token, has chosen to include WBTC among the pools eligible for liquidity mining.

From the data provided by DefiPulse, it would appear that around 77% of these tokenized BTCs are involved in decentralized finance . Indeed, the different DeFi platforms hold around 76,913 BTC. In the top three, we find Curve with 25,500 BTC, followed by Aave with 15,000 BTC and finally Uniswap with 13,300 BTC.

The Curve trading platform has accelerated this phenomenon following the launch of its governance token, the CRV. Thus, the amount of tokens deposited increased from 40 to over 200 million dollars in a matter of days. This trend has since continued, reaching a high of $ 360 million on September 16. 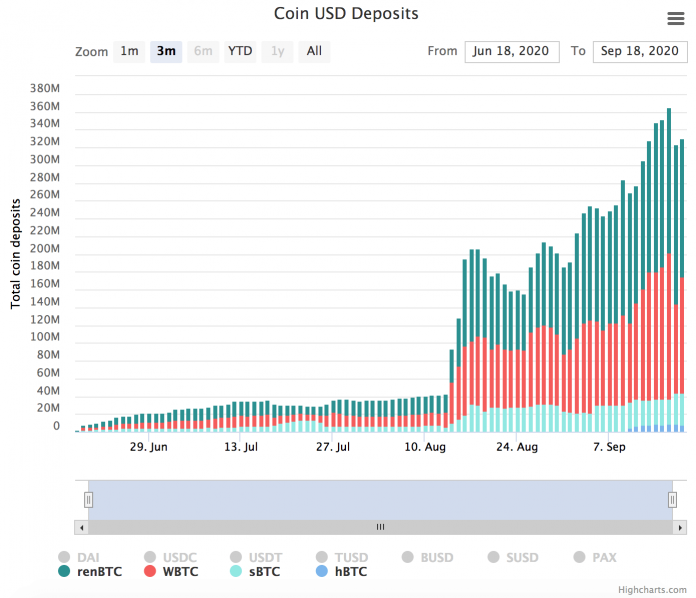 This phenomenon is not about to stop considering the exponential evolution of the tokenization of BTC on Ethereum. This is great news for the DeFi ecosystem which can take advantage of the strength of the queen cryptocurrency.