This week’s chart: Bitcoin price continues to move sideways, up and down, continuing the bear market. After all, the bottom and thus perhaps also the trend reversal are in sight. Ethereum, on the other hand, is continuing the downtrend more aggressively while other smart contract platforms are taking a massive hit.

Course events in the last few weeks have not been particularly exciting. Sometimes it goes up a bit, but before you take heart that a trend reversal is happening, the price collapses again and gives up everything you have won. At the same time, however, it does not sink so low that it would be THE buying opportunity. 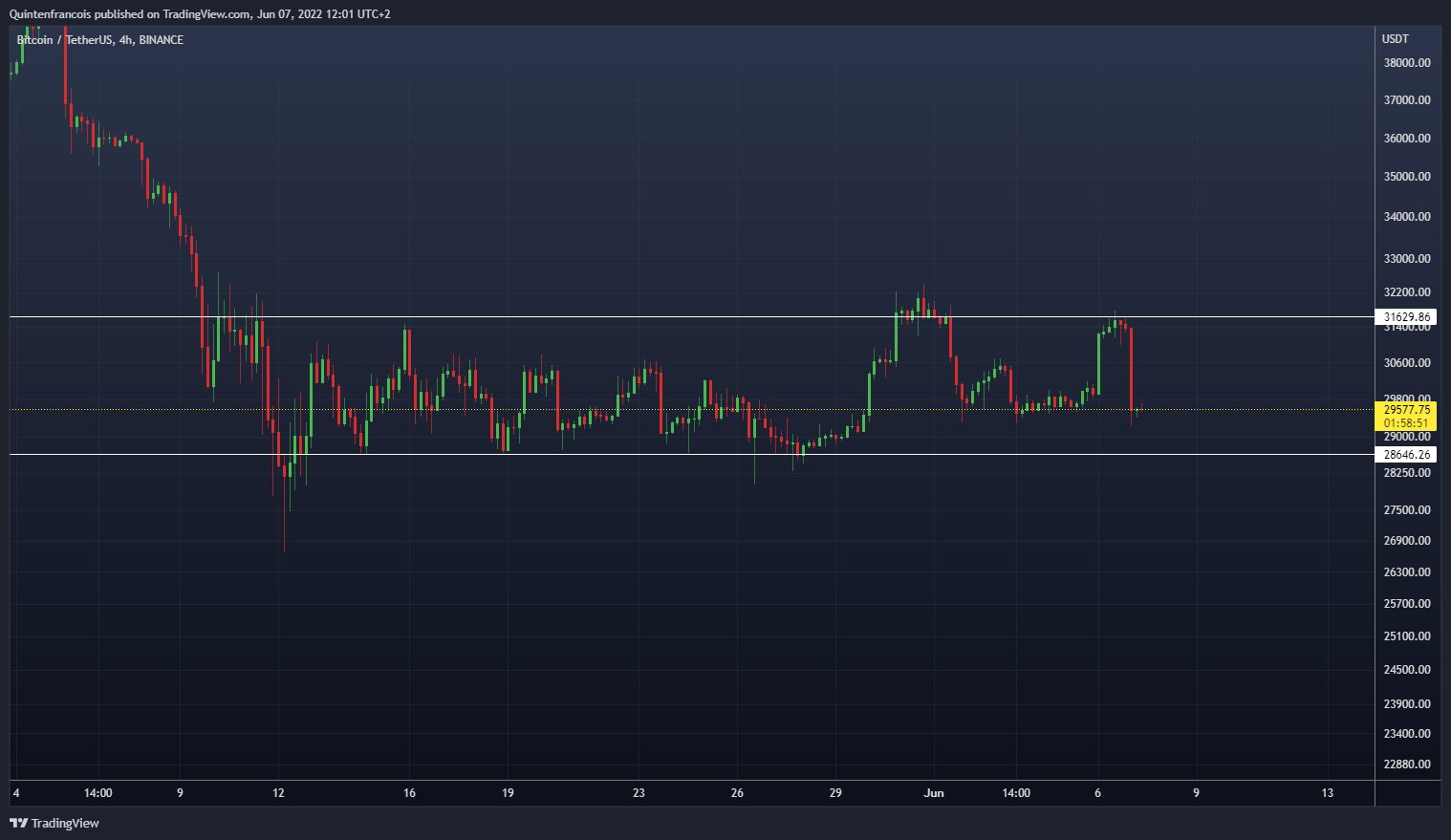 So the price remains in the somewhat shaky sideways channel with slight upward breakouts that quickly disappear. The bear market continues and those who invested at average prices in 2021 and 2022 are massively down. 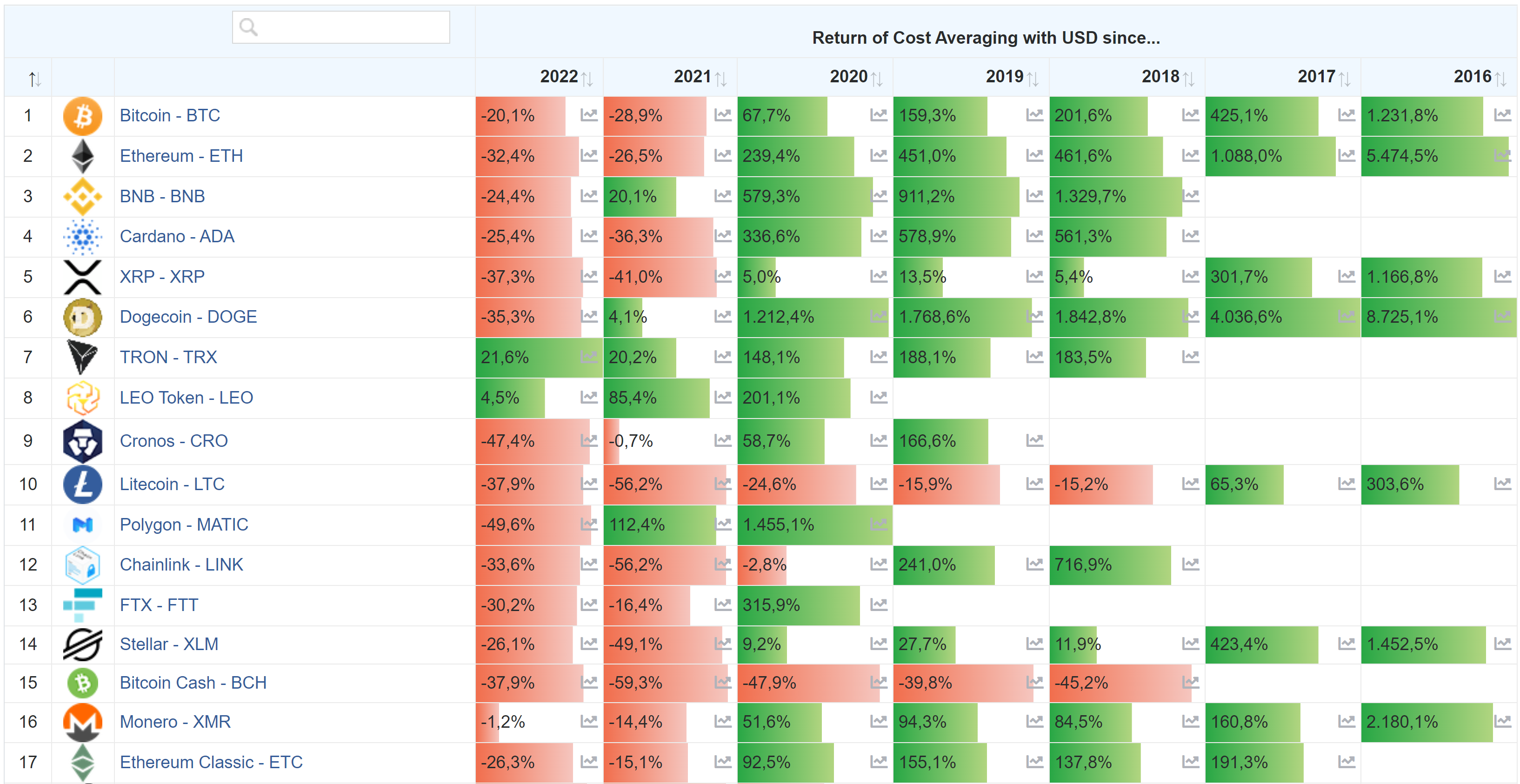 “Dollar-Cost-Averaging” according to the Blockchaincenter

Glassnode analysts state that the “Net Unrealized Profit/Loss (NUPL)”, i.e. the unrealized profits or losses, has fluctuated between 18 and 25 percent since the beginning of May. This means “less than 25 percent of the market cap is held at profit.”

This corresponds to “a market structure similar to the phase before capitulation in past bear markets.” When capitulation occurred in these, the NUPL collapsed from around a good 18 percent to a low point around and below 25 percent. Such a “full capitulation” would currently equate to a bottom of $20,560 to $23,600. From the current price of just under $ 30,000, it could go even lower.

The rainbow chart according to blockchaincenter.net

The rainbow chart confirms this assessment: Here the price has currently entered the second lowest color spectrum; below $21,000 he will plummet into the deepest. If the past were to repeat itself, entering this layer would be inevitable.

Attention has been falling since autumn 2021. As with the price, there seems to be a little downward scope here too. Compared to the last bear market, however, it is striking how consistently high the level of attention remains.

The rest of the crypto world

Aside from these bitcoin remarks, we have some interesting details to share about the broader market.

The price of Bitcoin currently looks cheaper than that of other coins, such as Bitcoin Cash or Ethereum. Where Bitcoin after the crash on Friday, May 13th (of all things!) is moving sideways with mild upward trends, Ethereum price shows a very clear downward trend of falling highs and falling lows. 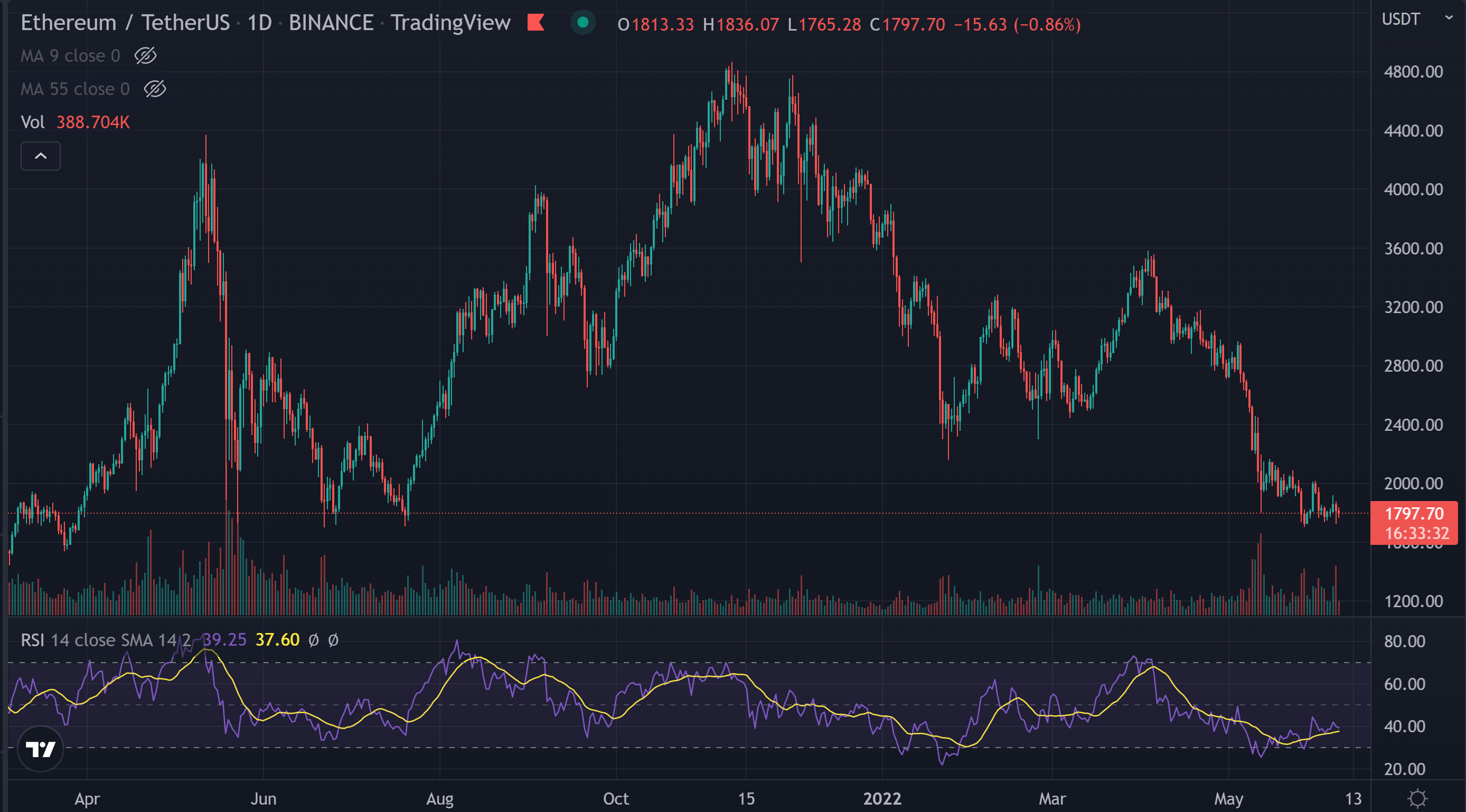 The Ethereum price in USD according to Tradingview

Most cryptocurrencies currently behave like Ethereum, which sets Bitcoin and a few exceptions, such as Cardano, Tron and Monero, apart from the rest of the market.
Even in the market for smart contract platforms, i.e. Ethereum and the “Ethereum killers”, not every coin is doing equally badly. Some lose, but others lose more.

Looking at Google Trends, we see that Ethereum is losing attention more aggressively than Bitcoin. Even more extreme, attention is slumping for NFTs while DeFi has evidently never made it onto the mainstream radar.

With Ethereum, the fees are falling, much to the delight of users. Etherscan’s chart shows declining miner earnings in Ether; in dollars the losses would be even greater. For users, this means that Ethereum will become usable again.

Fee income of Ethereum miners according to Etherscan.io

The consequence of this is that the incentives to switch to other smart contract blockchains are reduced. The “Ethereum killers” suffer even more than Ethereum itself.

The agony of smart contract platforms

In addition to the course, the TVL is a good indicator of this. This means the “Total Value Locked”, i.e. the capital invested in DeFi smart contracts. It is one of the fundamental metrics of DeFi.

TVL of various blockchains according to DeFiLlama.com

The TVL has plummeted across all cryptocurrencies over the past month. The big exception here is Tron, where it actually grew by more than 30 percent. This is mainly due to two apps, JustLend and SUN, and is probably related to the algorithmic stablecoin USDD, launched in early May, which wants to avoid the mistakes of the Terra Dollar UST through massive overcollateralization .
Otherwise we see TVL collapse on all blockchains. However, not all blockchains are created equal. For example, Ethereum, BNB and Cardano have dropped by a “moderate” strong 30 percent, while Avalanche, Polygon, Fantom and other coins have dropped by 40, 50 or even 60 percent.

Many blockchains were only relevant as long as DeFi and NFTs were hyping, and fees on Ethereum were exploding. Now the hype surrounding DeFi and NFTs has subsided, and with it the congestion on the Ethereum blockchain. At the same time, “layer 2 scaling” is establishing itself on Ethereum, such as the rollups through Optimism .

This graph looks very concerning if you are building applications on Solana. Economic activity in the last two months has collapsed. pic.twitter.com/XfEoL9vYT3

Hardly anything expresses this as clearly as the values ​​​​transported monthly on the blockchain. This has plummeted at Solana (SOL) since March, by 80-90 percent. This could be another indication that the bear market is nearing the bottom.

However, there are still 54 “unicorns”, i.e. cryptocurrencies with a market capitalization of more than one billion dollars. This should be perhaps the clearest signal that there is still good upside for the bears.