Bitcoin and crypto markets, in general, have turned bullish in the last months, and price action is pushing bitcoin prices too close to the all times high reached by December 2017. Cryptomarkets are actually are filled with optimism while big institutions and are getting more interested in the crypto assets. The last important institution expressing their opinion about bitcoin is Citibank, predicting a bullish scenario almost the same as Plan B seeing Bitcoin at $300,000 by the end of 2021.

The creator of the report, Thomas Fitzpatrick, an executive at Citibank tracks back the historical price action of bitcoin pointing that bull market cycles are getting longer and bitcoin price might reach the new top at $318,000 by December 2021 saying:

“Improbable though that seems it would only be a low to high rally of 102 times (the weakest rally so far in percentage terms),”

The report adds that bitcoin bull runs are followed by violent corrections which is a pattern that is necessary to sustain a long-term trend.

“…the price action we are looking at clearly suggest the potential for a major move higher nonetheless in the next 12-24 months,”

Despite the fact that this kind of analysis has not too much value especially from Pump guy that predicted gold at $3500 and silver at $100 back in 2013.

Before everyone gets hyped on this Citi report, the same guy said in 2013 that gold was gonna hit $3.5k and even used the same 1970s analogy. Not saying it won’t happen but this guy looks like Citi’s Pomp pic.twitter.com/F5Yh0TKT2s

However, it is a good advertisement for bitcoin as noted in a tweet from Alex Kruger, the trader that shared first the report Snippets.

“This kind of technical analysis is of little value, what matters here is Citi’s clients being exposed to the bitcoin moon.” 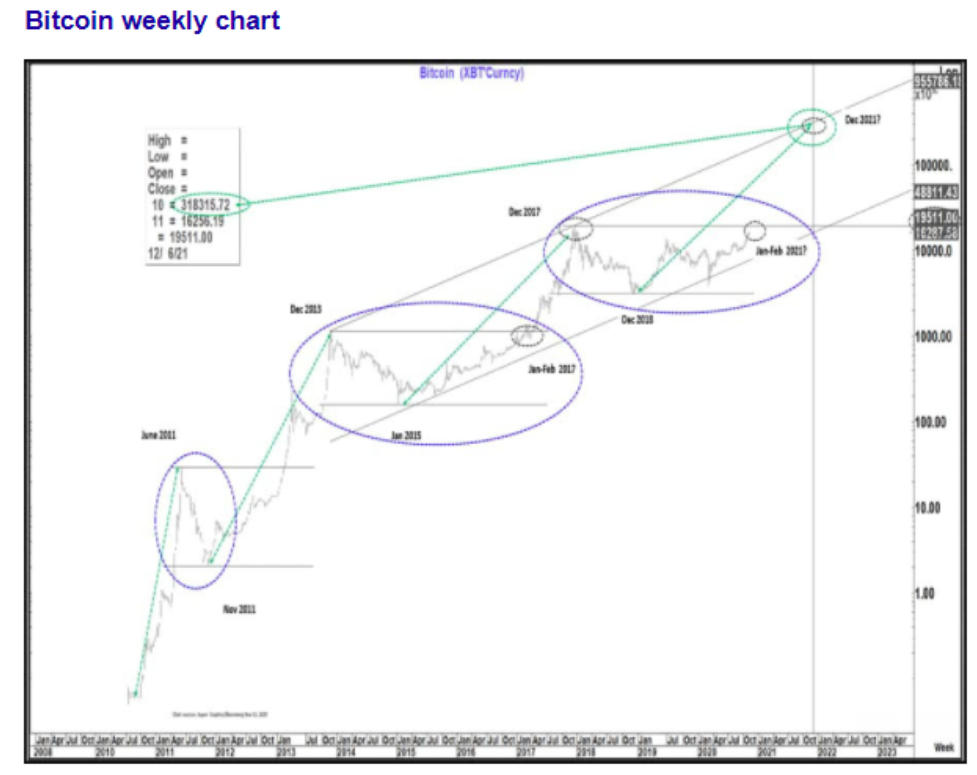 The report compared Bitcoin price action with the price action of Gold  which similarly: “was allowed to float in the early 1970s after 50 years of trading in a $20-$35 range.” What 1970 coincides is with a fundamental change in the monetary system, with the most important maybe being the paper money inflation that pushed the gold prices higher. On the other side, bitcoin was created in the aftermath of the great financial crisis in 2008.

The author of the reports also points to the disadvantages of gold, like it is not easily portable and hard to store, calling it “yesterday’s news” in the hedge contest and calls Bitcoin the new gold.

The top digital asset has a hard cap of 21 million bitcoins that will ever exist, it is easy to transport and to be stored, and also owner privacy. However, the report adds that bitcoin might be subject of restrictions by governments.

The report also talks about  CBDC-s as a better mechanism for stimulus distribution which makes capital easily confiscatable. What bitcoin gives us is a hedge against this monetary system that tries to control capital. Gold was in the past this hedge mechanism against (fiat paper) and bitcoin might be the digital gold vs (fiat digital currencies).