Crypto-clown of the day: Justin Sun and Tron’s 10 billion users (TRX)
Justin and the numbers make 2 – The founder of Tron, Justin Sun, gives us a nice ball. After having described the TRX as shitcoin himself , he shows an excess of enthusiasm this time, speaking of 10 billion users for the Tron network, a few billion more humans than in all the planet.

With a few zeros …

As beInCrypto, which has saved a screenshot (below), reports, Justin Sun got a little tangled up when talking about the number of users on his network.

The founder of Tron has indeed used the initial “B” for trillion ( billion in English) instead of “M” for million  : 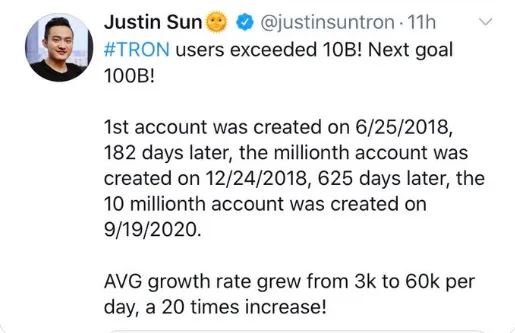 With currently just over 7.5 billion human beings on the whole Earth, we say to ourselves that Justin Sun is very (too?) Optimistic . Perhaps he is already counting the generations to come?

An apology and a correction

Obviously, according to a response on Twitter from the Tron Foundation on this “small” error, it would come from the team that manages the social networks of the project. She would have misused Justin Sun’s initial statement.

The founder would have actually wanted to celebrate the 10 million accounts created on the Tron network, a figure reached on September 19, according to him. A corrective tweet has since been posted in place of the erroneous old one.

(1/7) #TRON noticed that a message was circulating today on Twitter claiming “TRON Users exceeded 10B” in English. TRON prompted an immediate investigation.

We now release the result to both #TRONICS and the public:

The number still seems optimistic, however, since it concerns the number of accounts created, not users. Knowing that the same user can very well create several accounts, the reality is certainly still below.

Even though Justin Sun has gotten us used to the enthusiastic exaggerations since Tron’s inception in June 2018, this time around was really a bit too much. Between John McAfee and Justin Sun, the great comic circus within the cryptopshere is assured.