The countdown to the official listing of DhabiCoin (DBC) has started on six exchanges, three of them already at launch. In nine months of the ICO phase, DhabiCoin accomplished a feat never seen before in the crypto-actives market, overcoming the market’s distrust and becoming one of the main bets for this year of 2022. Check out the main gains of the project, advances achieved and expectations for after launch. Take advantage of the fact that you still have time to purchase your DBC token before launch. 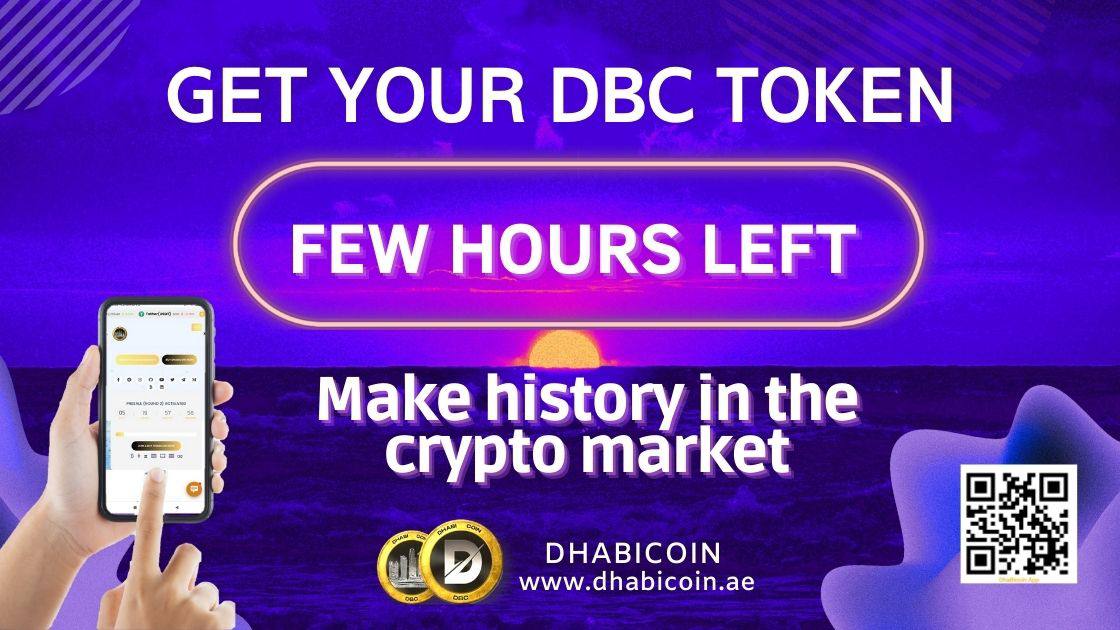 DhabiCoin was created to simplify paths, move the market, bring technology to the sector in an accessible way and with the premise of reaching several countries around the world. The priorities were always innovation, quality and meeting the needs of commerce with transactions without bureaucracy and wasted time. Blockchain technology shows that it is possible to increase the efficiency of financial transactions with security and high performance while the market demands more simplified and profitable processes. In just nine months of the ICO phase, DBC reached more than 30 thousand users present in about 60 countries, distributed in the four corners of the planet.

In March 2021 the first phase of DBC offers began when the token was offered at $0.02, an extremely affordable value for the first phase of active crypto. This is a phase in which more experienced investors study the asset and the team behind the project is receptive to criticism to correct possible gaps and polish them. The big surprise at this stage was the announcement of the closing of a pre-listing contract with a worldwide exchange, the Latoken exchange. This contract was the password the market needed to turn its attention to DhabiCoin. There, the signs of a great success that were to come in the following months were given, bringing with it the closing of yet another pre-listing contract and, this time, DBC surpassed the previous feat by signing with the Chinese exchange, Hotbit, which has a daily volume of about two hundred million dollars.

Four months after the pre-sale began, DBC announced that it would be trading on PancakeSwap, the largest decentralized broker (DEX) installed on the blockchain Binance Smart Chain (BSC). At this point, there was the first batch change and the DBC token started to be sold at $0.04. In other words, those investors who acquired DBC in the first batch had already assured a 100% appreciation of the amount invested and by this time, DhabiCoin was already present in more than 30 countries and reached the mark of 12 thousand registered on its platform.

Not even the usual fluctuations in the cryptocurrency market affected the DBC project because the team behind the project is composed of experts in the area of ​​blockchain technology, international market, communication and marketing and ended up surrounding itself with the most modern in these sectors. In September 2021, keeping warm in the world market, DhabiCoin impressed its users and potential investors by signing a new pre-listing agreement with one of the strongest exchanges in the world cryptocurrency market, CoinBene. CoinBene is TOP 8 in global business value according to CoinMarketCap’s certified ranking. Also in September 2021, after surpassing all the goals set by the developer team for the second season of its initial coin offering, DBC started its third pre-sales round, selling for $0.07.

DhabiCoin’s expansion plan is consolidated, well evaluated by experts in the cryptocurrency and blockchain sector. DBC passed the audit of TechRate, which is an analytical and engineering agency focused on blockchain technology solutions and audits. The project has attracted the attention of the specialized market and expanded its network of countries at each pre-sales round. In the final stretch of ICO, the management of DhabiCoin was even bolder and signed a pre-listing contract with the Dutch giant BigONE, which has in its portfolio almost two hundred cryptocurrencies and a daily volume of around 650 million dollars. As everything good is always last, DhabiCoin has signed a partnership with the LBank exchange which is top 25 on CoinMarketCap and serves thousands of users around the world. LBank has one of the largest portfolios on the market and a daily volume of over 1.2 billion USD.

DhabiCoin can still be purchased either on its official website or on the Latoken exchange (https://latoken.com/ieo/DBC). To guarantee more transparency and security to old and new users, the DBC management started its IEO (initial currency offer, in English) which in practice is the guarantee that the currency will be released. This is because, while in the ICO phase the responsibility for launching a coin rests with its developers, in the IEO, who assumes this role is the exchange. Because of the IEO, the exchange starts to use all its infrastructure to launch the asset. There is no greater guarantee in the cryptocurrency market that a token will be released than when that token is in IEO. DBC’s team of developers promises to continue working to ensure DBC’s success after its official listing on the exchanges and even beckons to list the currency soon on the Binance exchange, the top one of the exchanges. According to sources within the team, the company has partnered with hotel chains in the United Arab Emirates, DhabiCoin’s country of origin, as well as partnerships with companies and service providers around the world. To learn more, visit DhabiCoin’s social media and official website at www.dhabicoin.ae.