Now it’s official: In February, prices in the euro zone rose by 5.8 percent compared to the previous year, reports Eurostat. This is the highest value since the introduction of the euro.

Economists had actually expected a price increase of “only” 5.1 percent. But in view of the worrying world situation, the 5.8 percent is probably just the beginning. Frederik Ducrozet, a Swiss economist said on Twitter “stagflation shock of epic proportions” and that he expects an inflation rate higher than 6%.

🇪🇺 Euro area headline inflation rose to an all-time high of 5.8% in February – before the escalation.

It is likely to exceed 6% in coming months.
This is a stagflation shock of epic proportions. pic.twitter.com/pZJM921CWJ

The main drivers of inflation in February are energy prices, which rose by a dramatic 31.7 percent. But groceries also rose sharply by more than four percent. Bundesbank boss Joachim Nagel expects inflation to continue.

The economist emphasizes that with the sanctions that aims to stop the Russian  aggression, the inflation will get worse. And indeed, world market prices for many commodities  already indicate that things are about to get much worse.

Of particular concern are wheat prices, which are currently skyrocketing as Russia and Ukraine are the two top producers of the grain.

With 1340 per Bu, they reach an all-time high and have more than doubled compared to the previous year. A bu means 5,000 “bushels,” and a bushel equals 40 pounds of wheat. Accordingly, the price of wheat per kilogram on the producer markets remains at a relatively cheap 1.4 dollar cents. 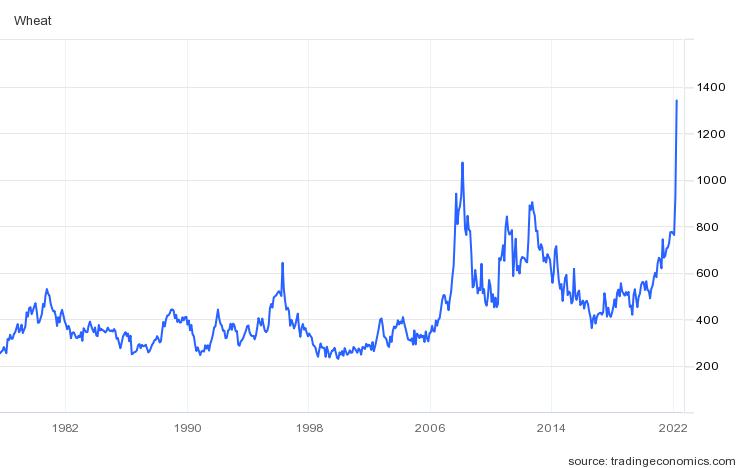 The price of wheat according to Trading Economics

The increase in the price of wheat is extreme, but is reflected in many other foods in a similar way. Oats already went through an extreme price increase in autumn and roughly doubled the price year-on-year. Although corn is significantly more expensive than a year ago, it cost even more in spring 2021. 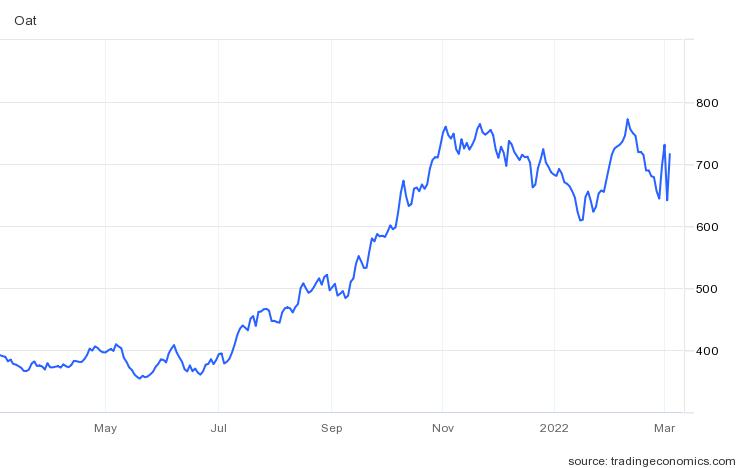 Prices for oats according to Trading Economics

Soybeans are up about 50 percent in the past six months, but remain just below the previous all-time high set in 2012. Palm oil prices have nearly doubled in a year to hit an all-time high; Coffee is also up nearly 100 percent, but still well below previous peaks. 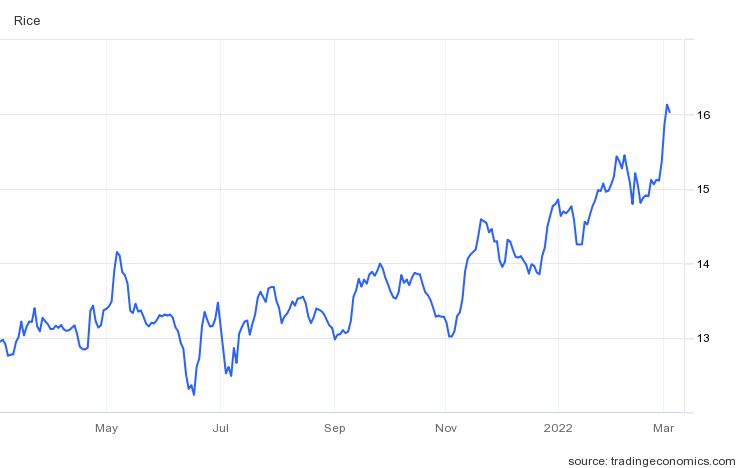 The price of rice…

Rice, on the other hand, is increasing moderately, by “only” 30 percent, sugar even less, and tea is even stagnating.

The second clear price driver is energy commodities. At $110 a barrel, the price has also almost doubled over the course of a year. A barrel is 158.98 liters, which means that a liter of crude oil costs 69 cents. Unlike wheat, however, crude oil is not an all-time high – the price in mid-2008 was still significantly higher at $140. 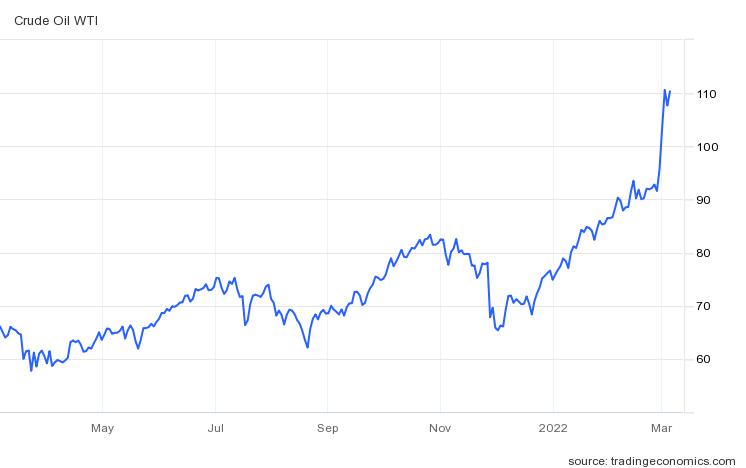 The increase in the price of oil has not yet fully impacted on petrol prices. US gasoline prices per gallon are rising significantly, but at $3.32 they are still below the peaks of 2008 and 2012. A gallon is almost 3.8 liters, which corresponds to a gasoline price of 89 cents per liter. 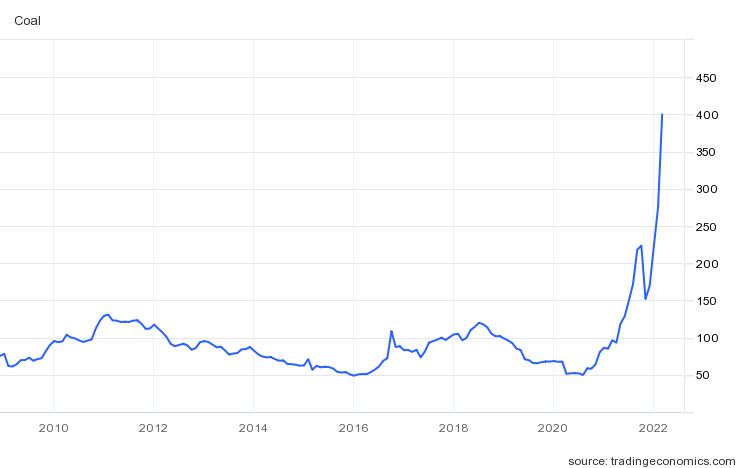 No commodity price has exploded as much as that of coal

Although the price of natural gas has doubled compared to the previous year, it was even more expensive in the autumn. The most extreme is the price increase for coal: Within a year, the price has quadrupled from 100 dollars a ton to 400 dollars and thus reached an all-time high. Compared to a low point in 2020, it has even increased eightfold. This is not exactly a good signal for the energy transition…

The central banks can’t help but admit that their forecasts were wrong through and through. In 2020 they warned of deflation, and as prices continued to rise after that, they gradually adjusted the forecast. It’s like a tragi-comic loss of trust:

“Yes, there is inflation, but it will be mild and remain below the targeted 2 percent mark on a multi-year average. Ok, inflation hits three, maybe even four percent. But that is only for a short time. Well, inflation has definitely reached four percent and that will drag on for a few more months but will moderate in the medium term…”

In defense of the central banks, however, one has to say that the current inflation has little to do with their monetary policy. The fact that the ECB reacted to the Corona crisis with a flood of euros and interest rate cuts boosted inflation even before the current crisis. Of course, the central bank can’t do anything about the Russian war and the associated shortage of raw materials.

Nevertheless, the ECB is pouring fuel on the fire with its continued expansive monetary policy. There is already open talk about a trend reversal, interest rates are to rise and bond purchases are to be phased out. But representatives of the ECB also warn against reacting too hastily. The risk of exacerbating the looming economic crisis with a turnaround in interest rates is too great.

In the USA, prices are also rising, at a good 7 percent even more. The Federal Reserve is now planning to counteract this with a cautious increase in interest rates. However, with a view to the world situation, all options will be kept open.

Since the USA is also less affected by the war in Ukraine than Europe, the dollar could appreciate significantly against the euro under these circumstances. Some economists even expect the euro to fall below the dollar in the medium term.

The horror that still looms

The inflation that arrives in the supermarkets and gas stations in Germany is only a foretaste in view of the rising prices. The manufacturer prices, which have risen since 2020 due to the Corona war and monetary policy, have so far only been passed on to consumers to a limited extent.

Should the war and sanctions continue, traders may have no choice but to let inflation seep into their coffers. Doubling the prices for food, electricity and petrol is anything but unrealistic. To a certain extent, wages and salaries will inevitably rise as well, setting in motion a wage-price spiral that perpetuates high inflation.

Such price increases are massively inconvenient for most residents of Germany, but do not yet threaten their existence. In other countries it is. For example in Turkey, where consumer inflation has already reached 50 percent, but producer prices are rising much further. Or in Lebanon . Conditions in the country already border on hyperinflation. Further price increases are likely to be the last straw here very quickly.

However, some European countries will also be much more severely affected by further price increases. In Lithuania and Estonia, the inflation rate is already well over 10 percent, in Latvia and Slovakia it is a good eight percent. In these countries, the risk of being drawn into a military conflict with Russia is likely to further dampen the investment and economic climate. But Belgium is also badly affected, with an inflation rate of nine percent.

A further rise in inflation could lead to state collapse in some countries and to revolutions in others.

Probably not yet included are the price increases for fertilizers. These were worrying even before the Russian crisis. Now that the world’s most important manufacturer of fertilizers is no longer a reliable trading partner, a lack of nitrogen and urea threatens to exacerbate food price increases.

At the same time, the sword of Damocles of a Chinese invasion of Taiwan hovers over the world. This sounds far away, but it is extremely relevant for the world since Taiwan is by far the largest producer of microchips . A war over Taiwan – or its incorporation by China – could cause the price of microchips, and with it virtually everything, to skyrocket.

Bitcoin is not a panacea – but useful

So, overall, it’s pretty unsettling to think about prices and inflation. Central banks can take countermeasures, but only to a very limited extent. With their policy of cheap money, they have already caused enormous damage, which is considerably exacerbating the current crisis.

However, an overly aggressive turnaround in interest rates could make the situation even worse. Most central banks already shot their powder during the Corona crisis and are left empty-handed in the crisis that is now beginning.

Bitcoin will certainly not be a panacea. There are fewer raw materials than the world needs, fewer microchips than factories are using, less fertilizer than farmers pour into their fields, less petrol than cars swallow, and less natural gas than heaters burn. When money is tight, like bitcoin, goods are no less scarce.

However, Bitcoin protects you from being plagued by inflation in parallel with a devaluation of money. Bitcoin irons out central bank mistakes. Anyway.

In addition, Bitcoin and other cryptocurrencies can help in a variety of ways to make business and finance more efficient on a global scale. Thus, international trade can benefit from the elimination of middlemen, consumers can earn reasonable interest through DeFi without giving it to banks, and so on.

As I said, cryptocurrencies are not a panacea. Nevertheless, they are probably more important than ever in the current crisis. The world can hardly afford to be without them.