The protagonists of Bitcoin mining are often rightly regarded as the most optimistic structures in the network. Unlike holders or institutional investors, their profitability is only effective in a relatively short period – which could be estimated between 3 to 5 years.

The promise of Bitcoin, both in terms of a new financial paradigm that its potential appreciation, has profoundly changed the profile of miners. In order to survive, these members of the network must redouble their ingenuity to obtain inexpensive electricity but also invest massively in mining hardware infrastructure.

This article will offer a dive into the world of miners and their factors of operational success. Just under 15 days from Halving, we will discuss its impact on the ecosystem as well as the difficulty adjustment property. The epilogue will be dedicated to the transformations of the structures of the old world and the role of Bitcoin in re-industrialization 2.0 .

Note that a substantial part of the data on which I would reason in this article are taken from a report about bitcoin mining and its evolution as it approaches its third halving, created by Matt D. Souza.

When the operational costs associated with mining are mentioned, the energy variable acts as a fundamental value. In fact, electricity-related expenses represent 95% of mining costs.

The miner electricity rate is broken down into 8 categories described below:

The average electricity price per kWh would cost $0.13 based on the previous graphical data, therefore we are able to confirm that:

The other crucial element, which substantially influences the performance of the network players, is characterized by the mining equipment used. Two types of miners are to be distinguished: 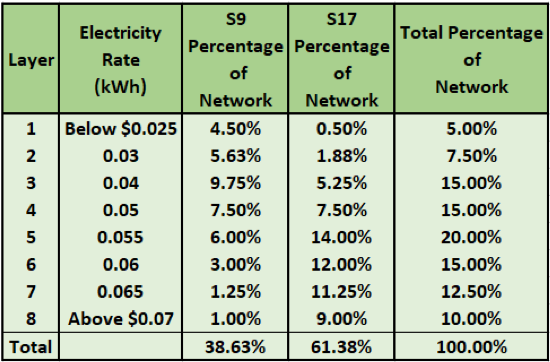 The latest generation equipment would constitute, according to this report, a non-negligible majority of the network (61.38%), making it possible to offset significantly higher energy costs. The opposite observation applies to older generation machines.

The intersection of the stratification of energy costs and the distribution of the generations of miners used within the network allows us to obtain an estimate of an average cost per bitcoin mined :

The magnitude of the price of a freshly mined bitcoin is therefore incredibly different. The best-equipped miners with the most favorable energy rates can get Bitcoin for the modest sum of 982 dollars, while the least fortunate simply have to multiply their costs by 10 – well above the prices of current spot exchanges.

Miners located in layers 5, 6, 7 and 8 and possessing older generation equipment are theoretically forced to sell all of the bitcoins they collect to pay their energy bill. 11.25% of the network would, therefore, be under great tension – while halving has not yet occurred.

Precise rules for the game

Knowing that at the time of writing Bitcoin hovers around $ 7,600, it is important to understand why certain categories of miners continue to operate, even when their operational costs are higher than the bitcoin price.

Halving and its consequences discussed

You understood it well, if with a daily Bitcoin emission as big as it is – 1800 daily bitcoins, 54,000 monthly – a large part of miners are already facing great difficulties… what will happen when the halving happens, and the amount of new bitcoins is halved?

If Blockware teams believe that the impact on the least virtuous miners will be destructive and go so far as to say that 30% of current mining structures may soon have to stop, the equation remains complex, by the presence of a difficulty adjustment system inherent in the protocol.

Indeed, the Bitcoin protocol has its own self-correction mechanism which stabilizes the profits of the mining network. It ensures an adequate income for miners who continue to support the network. This favorable difficulty adjustment is made to allow the same number of bitcoins to be distributed regardless of the number of participating miners, with the aim that a block is produced approximately every ten minutes, adapting to the number of miners who actually operate approximately every two weeks.

The next difficulty adjustment related to halving promises to hold its share of surprises, between potential impacts on the hashrate and profound changes in mining structures. There is no doubt that the concept of survivalism will be debated at length in the months to come.

The survival factors are therefore as complex and variable. Between energy variables, amortization of the tools used, efficient infrastructure and evolution of the protocol, miners have the obligation to adapt and redouble their inventiveness to remain consistent.

However, the game is worth the candle, and many institutional investors see mining as a fantastic opportunity to get bitcoins at prices below market prices. For this, mass financing is emerging and reviving manufacturing complexes from the old world in the rush for the digital gold.