The news right now is all about the Coronavirus. We join in today – but only to show how the coronavirus affects Bitcoin, ransomware that takes advantage of the attention, darknet markets that receive more orders, but also see netwok bottlenecks, corona tokens at the Ethereum -Blockchain, virtual conferences and sick developers – there is a lot to report.

Corona is as much a social media phenomenon as it is medicine. I am not aware that there has ever been an event that is so dominant on social media. Everyone constantly wants to know what’s new, and with a morbid fascination follows how the new number of cases is increasing exponentially and society is entering disease protection mode. I suspect this is where the cultural memory of half a millennium of plague quarantine comes into play.

Most of the consequences that the corona virus has on Bitcoin and other cryptocurrencies are therefore less due to the virus rather than to the high level of attention it receives and the measures that governments take to prevent it from spreading further. It is already known that the courses suffer extremely from the corona virus; In the meantime, even the blockchain center’s rain floor chart has broken, making Bitcoin worse than ever, at least in this charting. 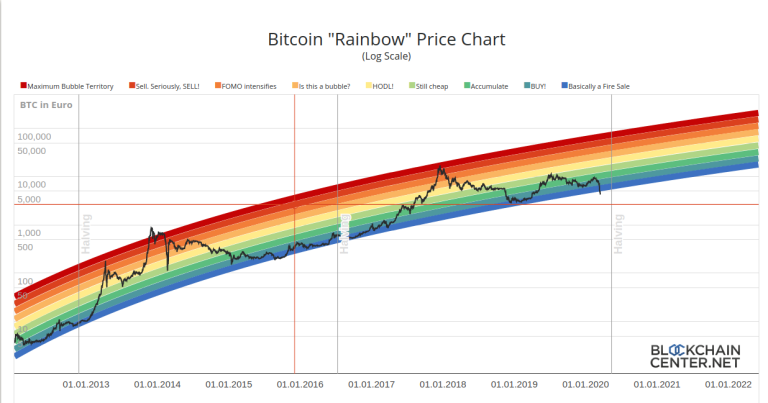 But that’s not the point here. We take a closer look: What are the consequences of the corona crisis for crypto? And how do cryptocurrencies and their ecosystems react to Corona?

The attention explosion is a welcome gift for criminals

The security company DomainTools has noticed an extremely strong increase in Internet sites that have the words “Coronavirus” and “COVID-19” in their names. Many of them are fraudulent. According to Check Point, there are more than 4,000 new domains around Corona, 3 percent of which are fraudulent and 5 percent suspicious. This makes Corona pages 50 percent more dangerous than normal pages, and even more dangerous than the usual seasonal pages such as Valentine’s Day.

An example is a page that prompts its users to download an Android app that shows a live map of corona infections. However, this app contains ransomware that encrypts the data on the smartphone, images, documents, even contacts, and then asks the user to pay $ 100 in Bitcoin within 48 hours to unlock the smartphone. In Russian Darknet forums, “CovidLock” kits seem to be already sold, which link such card apps with malware.

There are also many pages that track the spread of the Coronavirus, but inject malicious code into the browser in order to access passwords, cookies, user names and other information stored in the browser. This could be particularly dangerous for crypto users if they have saved access data to exchanges in the browser.

The British FCA, an independent financial regulator, has already issued a warning. “Beware of coronavirus fraud (Covid-19). Fraud comes in many forms, such as insurance, pension transfers or high-return investments, including investment in cryptocurrencies. ”

The site bitcoin.com reports on how the coronavirus affects the darknet markets, where generally prohibited products are paid with Bitcoin and other cryptocurrencies. Bitcoin.com is based on discussions in a Darknet forum.

In this forum, a retailer speculates that purchases will increase significantly because of the corona crisis, as “people want to stay in quarantine at home.” When general online commerce increases because people don’t want to shop in supermarkets, it does probably also for drug trafficking – while the obligation to stay at home could lead to an increase in drug use for many. In the Reddit forum r / darknet, a retailer also reports that the demand for the calming drug Xanax has increased significantly, which may be due to the fact that people are panicking about corona and are looking for pharmaceutical sources of sedation.

However, this also means that Swiss Post can no longer keep up with deliveries. Some dealers are already reporting that deliveries are delayed. The supply chains also appear to be affected. Some traders complain that the large crystal meth laboratories are closed because of a collapse in the supply of raw materials from China. The prices for the drug have already quintupled in Mexico.

Sometimes there are also traders who are trying to take advantage of the spreading panic. For example, someone in a market sells THC capsules with the advertising that they would protect against the coronavirus and strengthen the immune system. Other retailers sell respirators and disinfectants through the Darknet. And while Amazon has taken some of the goods that are currently in short supply due to hamster buyers and hoarders from the marketplace to prevent usury prices, the decentralized shopping portal OpenBazaar, which only pays with cryptocurrencies, advertises that there are no bans on goods there .

Nobody can stop you from selling/buying masks and sanitizer on OpenBazaar. pic.twitter.com/u84YAM9dBN

The collapse of the Bitcoin price in the past few weeks has hit many retailers hard; the coins they receive for an order often remain in the trust of the marketplace, which only releases them when the goods arrive at the customer or the customer does not object after a certain time. This gave them no opportunity to sell bitcoins at the value at the time of purchase, but in some cases with a loss of 30 to 40 percent or even higher.

Coronacoin: An Ethereum token for Corona

Any kind of attention is good because there is profit in it. In addition to the authors of ransomware, the designers of blockchain tokens also use this. For example, a group of anonymous Ethereum developers has released an ERC-20-based Coronacoin (NCOV). The project website is currently offline.

The amount of tokens is regulated by a macabre mechanism. In the beginning, as many tokens were issued as there are inhabitants on earth. The quantity decreases every 48 hours, and one token is destroyed for every (real) corona infected person. If experts predict that, in the long term, 60-70 percent of the population will need to be infected at least once in order for the herd to develop immunity, the Corona token could be a not so bad investment – if the developers keep their promises, for which there can, of course, be no guarantee.

At the same time, the developers are planning to release a game as a smart contract for the tokens. The game is said to be a mixture of the board game Risk and the computer game Plague Inc. The goal is to wipe out the human race with a virus. Players should be able to design viruses that come on the blockchain as a non-fungible token, like the CryptoKitties, while the corona coins act as a kind of betting token in the game. Since the developers have taken the advice of virologists, the game should be reasonably realistic and also enlighten. To win, you have to become a virus expert yourself, knowing which parameters (mortality, spread) and under what circumstances (temperature, material liability) make a virus most human victims.

While this corona token still appears to be innovative and also wants to provide educational fun, there are other tokens that just seem to be free-riders. There is now also the Corona Virus Token (CNV) and the coin CORONA (CORONA). While CORONA is supposed to be distributed via “infected addresses” to attract attention, there is hardly any information about CNV.

The Ethereum conference Ethereal will not take place live at the beginning of May as originally planned. The actual event in New York was postponed until autumn, while the first virtual Ethereal conference will take place in early May. Bitcoin events such as the Socrates seminar also take place in virtual space. Virtual does not only mean that the participants see the speakers on their screen, but that the conference takes place in a real virtual world – including an auditorium, clapping and likes, a lobby and an after-pool party.

Another day, another get-together in VR! This time @alexbosworth talked about Lightning Loop, Submarine Swaps, and our Batched Future.

After the presentation, we had a virtual Q&A (with some delay😅) and a nice after-party at the pool.

The coronavirus is accelerating a trend towards virtualizing conferences. The large consensus that Coindesk organizes annually in New York also takes place virtually this year. The magazine will fully compensate all participants who have already sold a ticket. With Coindesk receiving over 85% of its annual revenue from this conference, this could hit the company hard.

At Ethereum in particular, this virtualization seems to be absolutely necessary. After the Ethereum scene has met at numerous events in the past few weeks, reports of infections are now piling up. The first Ethereum developer I knew with a positive corona test was Afri Schoedon from Berlin, who suffered from severe flu-like symptoms after attending the EthCC conference in Paris in early March. The Ethereum community is now tracking the infection chains, and there are now 13 confirmed cases among participants in the EthCC conference. At the same time, the community is trying to find everyone who has had contact with the Corona sufferers from the EthCC at the many other conferences.

Altcoin miners are said to target GPUs on drug discovery

Many hobby miners use their graphics cards to mine altcoins. Now you have the opportunity to invest this computing power in researching a therapy or a vaccine against corona.

Folding @ home is a network that enables people from all over the world to donate their excess computing power for protein research. The project now explains in a press release that they are helping to better understand the coronavirus. After the fall in the price drove many altcoins so deep that mining no longer pays the electricity costs – if it did in Germany before – this could be a good alternative to let your graphics cards work on something useful.