Litecoin (LTC) introduces an option for much more privacy. This is made possible by the MWEB upgrade, which activates the Mimblewimble protocol through extension blocks. If you don’t understand what’s behind these terms, you’ve come to the right place: we explain what the upgrade does – and what political questions it raises.

The Litecoin community has been looking forward to this moment for a good three years: The cryptocurrency, which once marketed itself as “the silver to gold Bitcoin”, introduced the Mimblewimble protocol via soft fork with the MWEB upgrade.

Litecoin guru Charlie Lee describes the upgrade: “In terms of fungibility and privacy, I think MWEB hits 90 percent of the possible. That’s good enough for most people. You can compare it to living in a house with windows instead of a glass house.”

Leaving aside the more political aspects of privacy and houses with windows for now, let’s get down to technology: What exactly does the MWEB upgrade do? What is Mimblewimble, what are Extension Blocks?

The answers to this go back relatively far: to an era of cryptocurrencies when Ethereum was still a rather small topic, when the price of Bitcoin was below 1,000 dollars and Litecoin was below 5 dollars, and when the community was concerned about the increase the block size mangled. Time for nostalgia.

Mimblewimble is a cryptocurrency protocol first announced at Scaling Bitcoin in Milan, 2016 . A developer using the alias Jon Elton Jedusar published it on Bitcointalk, where Blockstream developer Andrew Poelstra found it and took a closer look with a colleague.

Mimblewimble is relatively complex. It combines two methods of privacy: CoinJoin and Confidential Transactions . CoinJoin means breaking down a transaction into its component parts and then merging them with other transactions. This creates a super transaction in which it is almost impossible to tell which input belongs to which output. Confidential Transactions, on the other hand, uses advanced cryptographic techniques to hide the amount of a transaction. In combination, the two methods achieve a very high level of privacy.

“Mimblewimble does something magical with the data of the transactions, unceremoniously removes the scripts, mixes inputs and outputs, replaces the amounts with blind evidence…:” I wrote at the time after seeing the presentation, “the result is largely complete anonymity and better scalability. The evidence, says Andrew Poelstra, works. MimbleWimble kills two birds with one stone.”

Mimblewimble is considered brilliant and progressive. It arouses the admiration of anyone technically versed in the subject. It was first implemented with the cryptocurrency Grin. Although this reaped great advance praise from cryptographers and developers, it did not achieve the slightest economic importance. Their chart history is pure massacre, culminating in the standard curve of all shitcoins. 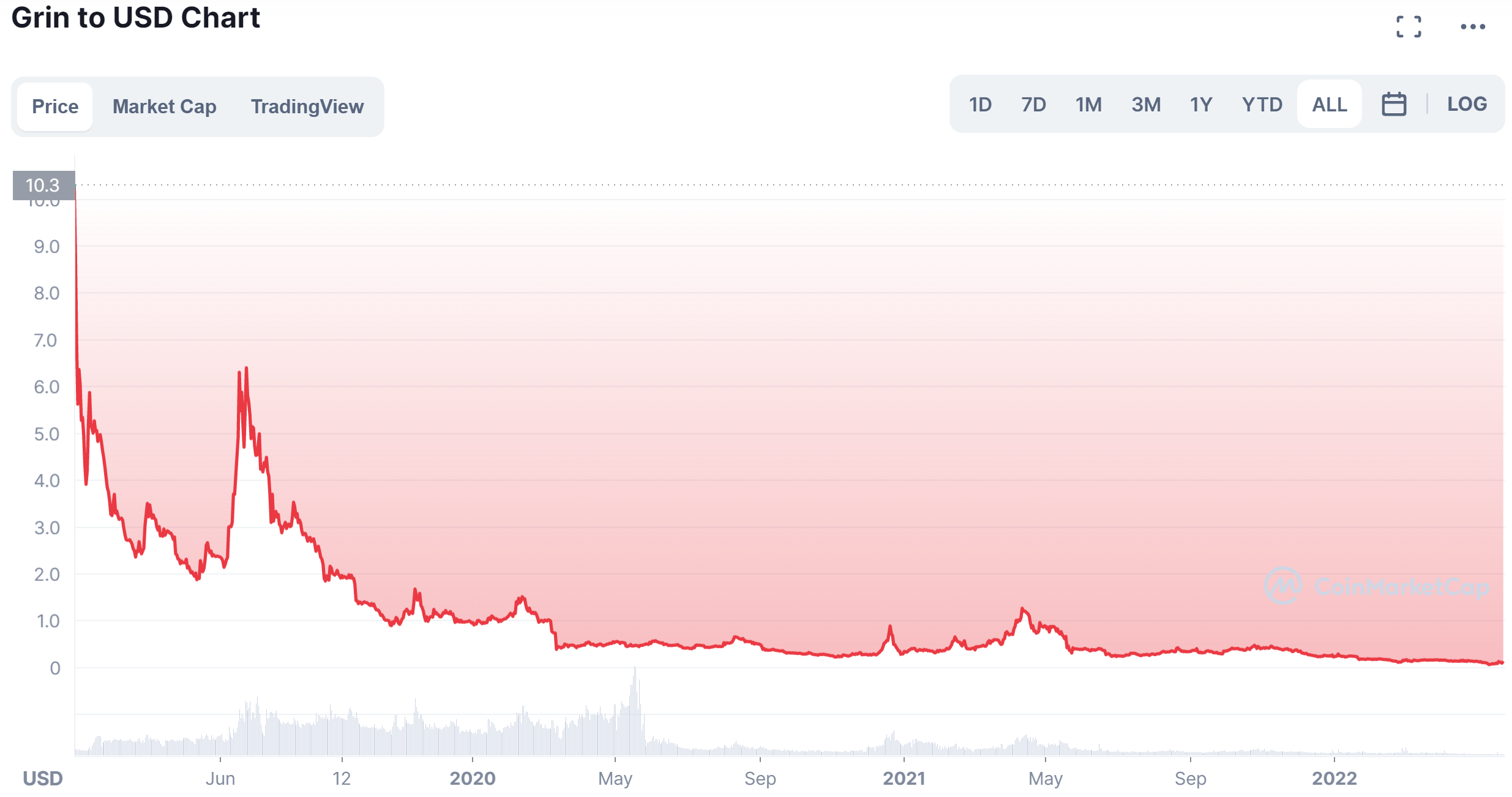 Nevertheless, Litecoin inventor Charlie Lee and the community decided early on to give Mimblewimble a chance. They raised money to hire Grin developer David Burkett to bring Mimblewimble to Litecoin. The hope is that both will be mutually beneficial: Litecoin as a base helps Mimblewimble attract users, while Mimblewimble helps Litecoin become better.

But in order to make Mimblewimble part of Litecoin, David Burkett still had to solve two challenges.

The first challenge is to bring Mimblewimble onto an existing blockchain without disrupting it too much.

The solution to this is the Extension Blocks. They were first proposed by Bitcoin developer Johnson Lau in 2013, among other things to increase Bitcoin capacity without putting too much strain on the blockchain itself.

In the wake of the wars of scaling that raged between 2015 and 2017 , the Extension Blocks reappeared as a proposition , albeit from the wrong side, thus serving only as oil to further fuel the conflagration. This is how I described Extension Blocks back then:

“Extension blocks are effectively at the end of a block and are only visible to miners and nodes if they have upgraded via soft fork. Similar to how SegWit pushes the signatures of transactions into an extension block, extension blocks create more space outside of the conventional block size without affecting the integrity of the previous blockchain. In other words, nodes that do not want to see extension blocks continue to enjoy a 1 MB blocksize, while those that want more have larger blocks.”

The Litecoin Foundation explains Extension Blocks as an “extension of Litecoin’s mainchain, or a parallel highway” on which to send the coins so that they are in Extension Blocks.

Extension blocks allow Mimblewimble to be introduced in a gentle way through a soft fork . The full nodes have the choice of carrying the extension blocks or not.

But before Mimblewimble could become the MWEB upgrade, David had to defuse one last problem. Because Mimblewimble has, for all its beauty, a significant catch. The Minglejingle proposal describes this succinctly: “All transactions must be constructed interactively by the sender and the recipient.”

In order to receive something via Mimblewimble, you have to be online and somehow create a channel through which to communicate with the broadcaster. It’s kind of like Lightning, and it makes things very complicated, cumbersome, and, depending on the circumstances, less secure.

Minglejingle now solves this problem and allows “non-interactive” Mimblewimble transactions. Exactly how this works is very complex and beyond the scope of this article.

Suffice it to say the following: The MWEB upgrade introduces Mimblewimble in a very gentle, non-disruptive manner, while also addressing Mimblewimble’s greatest weakness.

MWEB found the favor of users, developers and miners. After several months of dialogue with the miners, the upgrade introduced via soft fork received the necessary approval of 75 percent of the miners on May 2nd. It was activated a few days ago.

This makes Litecoin the first major blockchain to launch Mimblewimble. Of course, it will take a little time before users get it. The wallets first have to be able to get the coins into the extension blocks (and back again) and they have to learn to understand Mimblewimble transactions and addresses. This will still require a lot of work from the developers.

The political implications of the upgrade are less obvious.

In the crypto scene, privacy is almost universally considered a positive. The more private the better. Accordingly, for many it is hard to imagine that an upgrade that makes a cryptocurrency more private – if not outright anonymous – can also have disadvantages, and that transparency can also have advantages .

The Litecoin Foundation already reacted to possible problems with too much privacy a year ago. “After we coordinated, we came to the conclusion that the risks are low. If, for whatever reason, governments one day decide to suppress privacy-enhancing cryptocurrencies (which would be done by putting pressure on regulated exchanges), exchanges would just have to stop supporting extension blocks , instead of Litecoin’s mainchain.”

Governments only like privacy when it comes to them. To protect their secrets, their transactions, their plans. When it comes to citizens, on the other hand, the scale changes and privacy tends to become a threat. While governments are happy to profess privacy, when privacy undermines their ability to monitor and spy on citizens, privacy is a stretch.

An example is the privacy coin Monero, which has been delisted from many exchanges and many have never been admitted to trading. In addition to the (potential) resentment of the government, pragmatic reasons also play a role here: The more private a cryptocurrency, the more difficult it is for the exchanges to meet regulatory requirements that are tailored to non-private cryptocurrencies or banks. Instead of risking the trouble, the stock exchanges prefer to do without voluntarily.

Something is happening with the MWEB that the market has never known before: a perfectly transparent coin is slipping into the privacy coin camp. However, the Foundation’s hope that the optionality of privacy would prevent negative consequences has already been dashed.

Two major Korean exchanges, Bithumb and Upbit , issued a warning that the MWEB upgrade could hide transaction information and undermine the exchanges’ ability to comply with Korean laws. In the past, exchanges have withdrawn coins from trading following such warnings.

In addition to this debate about regulation and privacy, the MWEB upgrade opens up a second political front. The Litecoin Foundation also describes this on their blog:

“It is interesting to note that Litecoin is upgrading ahead of Bitcoin with MWEB for the second time in its decade history. The first time was in 2017 when Litecoin first enabled SegWit. Usually the upgrades flow from Bitcoinu to Litecoin, but if necessary, Litecoin is also able to make the first move. Since the code of Bitcoin and Litecoin is very similar, it makes sense to exchange technologies between the two. There is a possibility that Litecoin’s MWEB will serve as a blueprint for Bitcoin to one day improve fungibility and scalability as well.”

So is Mimblewimble on Litecoin only the prelude to introducing the protocol to Bitcoin as well? Is Litecoin testing how well an upgrade through Extension Blocks works, and how exchanges and regulators react when an inherently transparent coin suddenly introduces the option to enjoy vastly improved privacy?

Vlad Costea from bitcoin-takeover.com rejoices that the upgrade is “incredibly good news for privacy on L1”. L1 means “Layer 1” and is a synonym for the base blockchain. “If it does well for a few years, I’m all for bringing it to bitcoin too.”

Other bitcoiners are less enthusiastic. Blockstream boss Adam Back quibbles that he doesn’t think Mimblewimble is “a particularly strong privacy enhancement, since transaction history is still recorded even though it’s later dropped, and the scaling benefits only come with larger transaction sizes. “

Otherwise, the enthusiasm among Bitcoiners seems to be mixed. Some want Mimblewimble for Bitcoin, others are more skeptical.

So one can at least state that a transfer to Bitcoin in the near or medium future is largely impossible. But if Mimblewimble actually proves itself, it could well be up for debate. Until then, however, the MWEB upgrade gives Litecoin a unique position among major cryptocurrencies.