Central banks in panic  – After admitting that looking down and ridicule on cryptocurrencies was a big mistake, central banks are mounting their defense. No less than 8 central banks – including the BIS, nicknamed “the bank of central banks” – have just released a joint study, which should serve as a basis for the issuance of digital currencies.

On October 9, the Bank for International Settlements (BIS) has just published a long report which lays the foundations for the monetary policies of the future, which will be carried out thanks to the digital currencies of central banks (CBDC).

This study was carried out with the cooperation of 7 other central banks, namely:

The report, therefore, lays down common basic principles for the CBDCs of these banks as well as their main characteristics.

“While technology is changing the way we pay, central banks have a duty to safeguard people’s trust in our money. Central banks must complement their domestic efforts with close cooperation to guide the exploration of central bank digital currencies to identify reliable principles and encourage innovation. The present report is a convincing proof of this international cooperation. – Christine Lagarde, President of the ECB

What is a good CBDC?

As you can see from the excerpt of the report opposite, the list of characteristics for a perfect CBDC is as long as the arm. 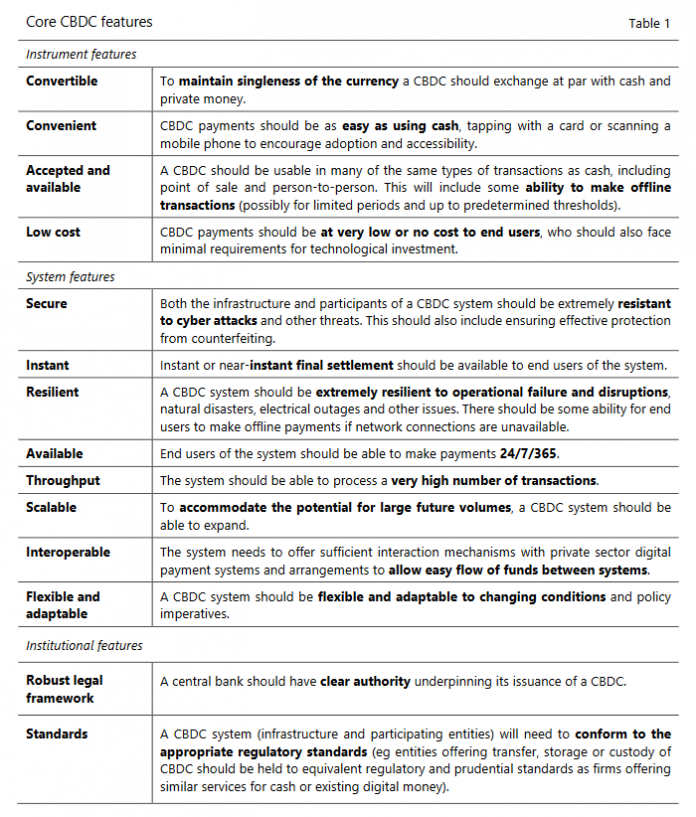 Without going over it exhaustively, we will note that this digital currency must be:

Obviously, as one might expect, these CBDCs will also have to respect a strict regulatory framework, with central banks as the supreme authority to issue and dispose of these digital currencies.

In short, Western central banks are still in the process of establishing a legal framework, even before drafting any prototype of CBDC. Meanwhile, China is moving forward and has already successfully completed its first tests of its DC / EP system.