Optimism is a so-called “Optimistic Rollup” that aims to scale Ethereum to an “L2”. Now there is an optimistic token (OP), which is distributed to users via airdrop, among other things.

With Optimism, Ethereum’s first major L2 is releasing its own token: OP. The OP token is distributed via airdrop based on the model of Uniswap and ENS: Anyone who has used the rollup in the past benefits and can pick up the tokens here. It’s (still) worth it.

Since the topic is important but probably complicated, we will break it down into its components and work through them piece by piece.

Optimism is a so-called “ Optimistic Rollup ” of Ethereum that forms a kind of “Layer-2” (L2), similar to the Lightning Network for Bitcoin. A rollup is rooted in a smart contract on the Ethereum blockchain, but processes transactions “locally” by the aggregator. However, this repeatedly stores evidence of the transactions in the smart contract; if he cheats, users have the option to reverse the transaction in question.

Ethereum developer Christoph Jentzsch described rollups as follows : “It’s essentially very simple: You compress many transactions into one by throwing the data together, and everyone can check the result.”

The aggregator at a rollup cannot cheat. The worst thing he can do is block a transaction. However, this type of Layer-2 is highly centralized on the aggregator. And in the case of Optimism, this is currently Optimism PBC.

In the Ethereum scene, rollups in their various forms have established themselves as the most popular scaling option. Rollups can tend to run any smart contract that runs on Ethereum, and they are relatively close to the Ethereum blockchain, rather than, like Polygon, sidechaining the coins and tokens onto a sidechain that, thanks to its own coin, effectively behaves like a completely different blockchain behaves.

Like so many Dapp and DeFi projects, Optimism faces two problems: first, a pivotal entity in this space feels like an alien entity; secondly, even if the development is very successful, it is often difficult to finance it.

Compound , Uniswap or ENS , for example, have tried to solve these problems with their own token . Optimism PBC also follows these models when the company issues the OP token.

Unlike sidechain tokens like Polygon (MATIS), the OP token is not required to use Optimism. The company would do well to refrain from buying a short-term profit by putting this massive hurdle in the way of users. Instead, like the Uniswap and ENS tokens, the OP token has two main purposes.

First , it puts money in the founders’ pockets . Because 19% of the tokens are distributed to the “core contributors”, i.e. to the developers of Optimism. This equates to around $100 million (at today’s rate). Another 17% goes to the investors who financed the developers. The token has probably been on the roadmap for a long time and was a prerequisite for raising capital.

Optimism users also benefit. 19% of the tokens will be distributed to those who have used or otherwise supported Optimism. Another 25% goes to an “ecosystem fund” that performs various tasks and is intended to help Optimism continue to grow. 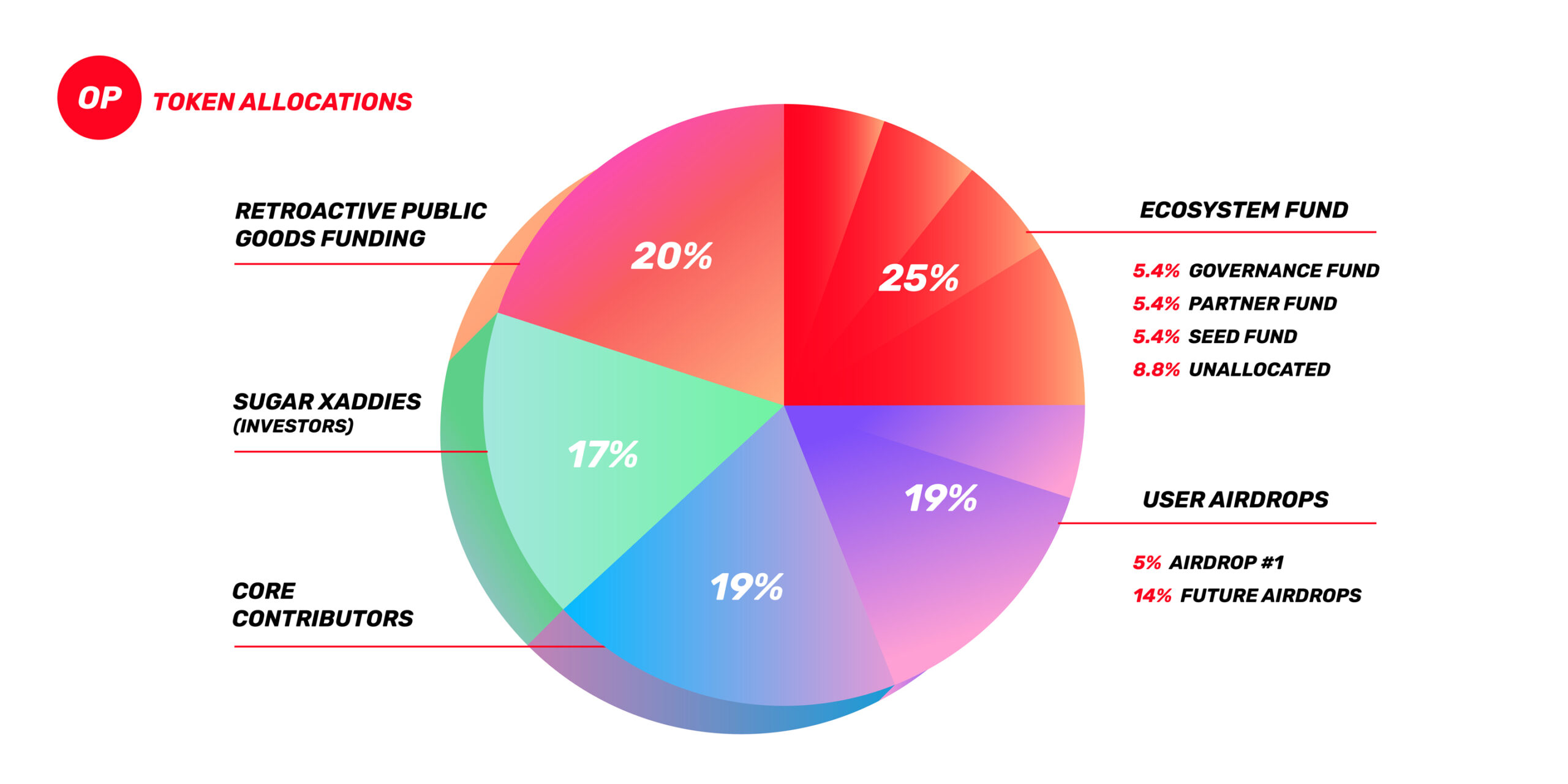 Part of this ecosystem fund is the “Governance Fund”: A budget for the administration or government of Optimism. And that brings us to the second goal.

The OP token becomes the basis of Optimism’s decentralization itself. “The Optimism Collective is a grand experiment in non-plutocratic governance and public good financing…” writes Optimism PBC . The tokens are intended to “distribute control of the network for the good of the protocol.”

The management of Optimism should be based on two pillars: The “Token House”, in which the owners of the tokens vote in an explicitly plutocratic process. Whoever has more tokens has more votes. The second pillar is the “Citizen House” in which owners of Citizenship NFTs vote. These NFTs are said to be “ soulbound tokens ” that cannot be further transferred. It is not plutocratic but democratic.

Both houses together will “help use proceeds from Optimism L2 to support public goods and uplift the collective.”

The Optimism collective will initially be managed by the Optimism Foundation. This consists of staff from the previous company, Optimism PBC, but also other representatives of the Web3 ecosystem, such as Maker-DAO. Optimism PBC itself will be renamed “OP Labs PBC” and will focus on development and technology.

However, the scope of “government” (governance) is rather limited. Because the core of the operation of rollup – the aggregation of transactions on a central server and the generation of evidence for them – remains necessarily centralized. Maybe there will be decentralized variants, maybe there will be an interoperable network of multiple Optimism aggregators. But so far this core function has eluded any decentralization.

The powers of the Optimism Collective are limited to deciding how and for what revenue is managed. It is currently uncertain whether it has power beyond promises to enforce such decisions, even against resistance from Optimism.

A stress test for optimism

Nonetheless, the airdrop was a respectable success. Any address that has used Optimism once, for example on Uniswap or any other DeFi app, can collect 776.86 OP tokens; Addresses that have frequently used Optimism even 1,692.49 OP.

At the time of issuance, the OP tokens were worth $4.50. However, they quickly fell to around a dollar and are currently at around $1.46. This means that every address that has ever been active on Optimism will receive almost 1000 dollars for free. Not a bad surprise, right? 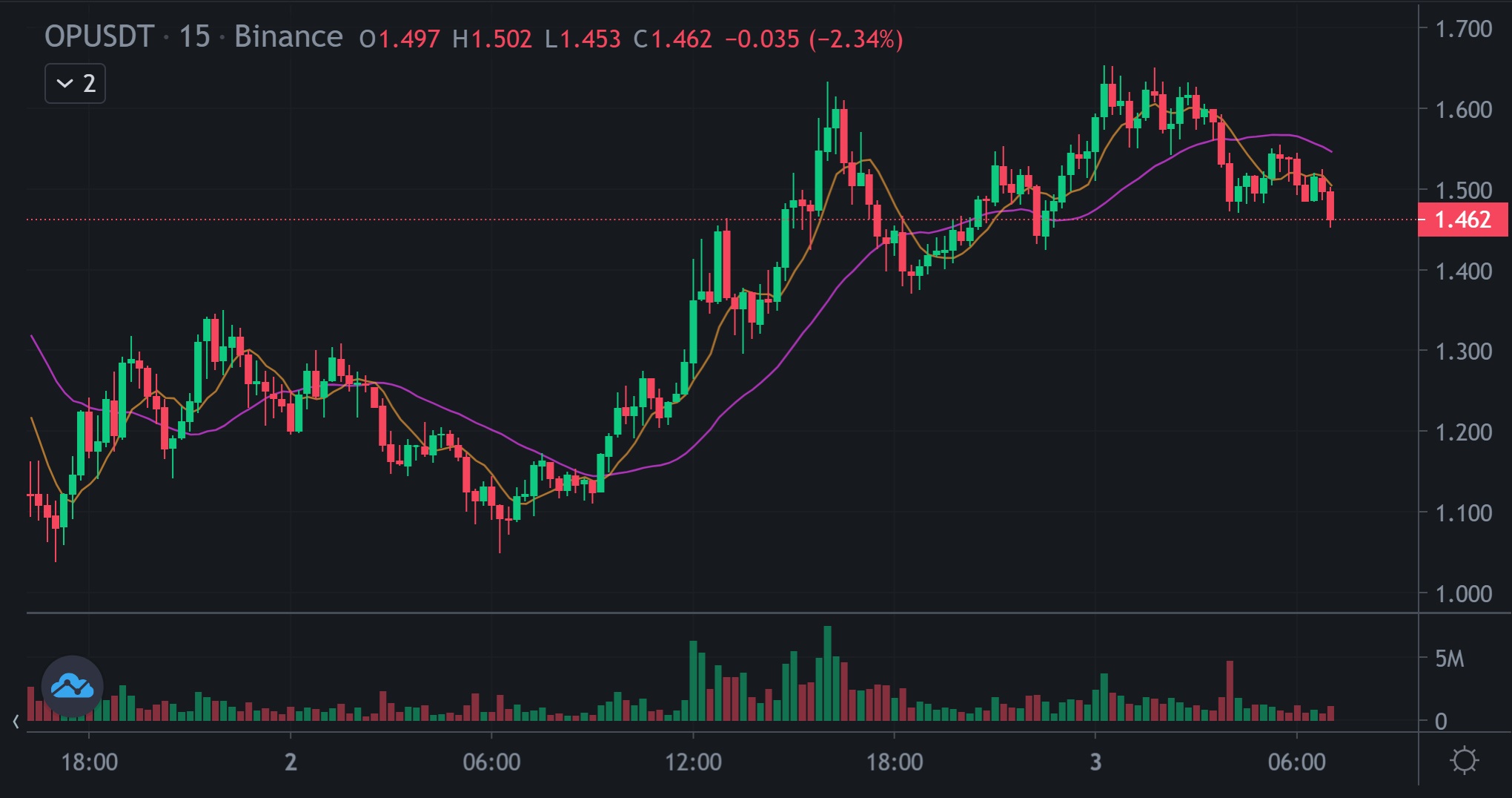 An airdrop not only manages to transparently distribute tokens to users in a reasonably fair method. It also becomes a good marketing tool. He gives media a template to report on, he pleases users who will (hopefully) become even more loyal now, and he promises to create a new kind of organization in the future.

The airdrop also became a stress test for Optimism: users picked up the tokens on the Optimism rollup and swapped them on an Optimism-capable DeFi app, such as Uniswap, or put them in a liquidity pool. According to Etherscan, the rollup has done around 50,000 to 80,000 transactions a day so far , but yesterday it was almost 500,000 – half as many as on the Ethereum mainchain.

With this demonstration, Optimism positions itself as the patent L2 to scale Ethereum. However, the success of the airdrop should motivate users that do not yet have tokens to use other L2 from now on , such as Arbitrum. Because it should only be a matter of time before they also distribute tokens to their users. Airdrops make using an app a potential investment.