Yuga Labs, the publishers of the NFT hit Bored Ape Yacht Club, have all but crippled Ethereum with the Otherdeed mint. Fees hit new records, which means quite a bit on Ethereum.

Those of you unlucky enough to do anything with Ethereum on Sunday May 1st may have stumbled upon outrageously high fees. It happened again. There was another one of those events that make waves so big that Ethereum drowns in it for a short time.

This time it was about the Otherdeed-Mint with APE tokens from Yuga Labs. And since you probably don’t get this off the top of your head any more than I do, I have to go back a little bit to explain all of this to you—and me.

It starts with the Bored Ape Yacht Club (BAYC) , a collection of 10,000 NFT avatars that represent, well, bored apes on vacation. You can buy these NFTs on OpenSea, and with a floor price of 128 Ether, BAYC even managed to knock CryptoPunks off the NFT throne. 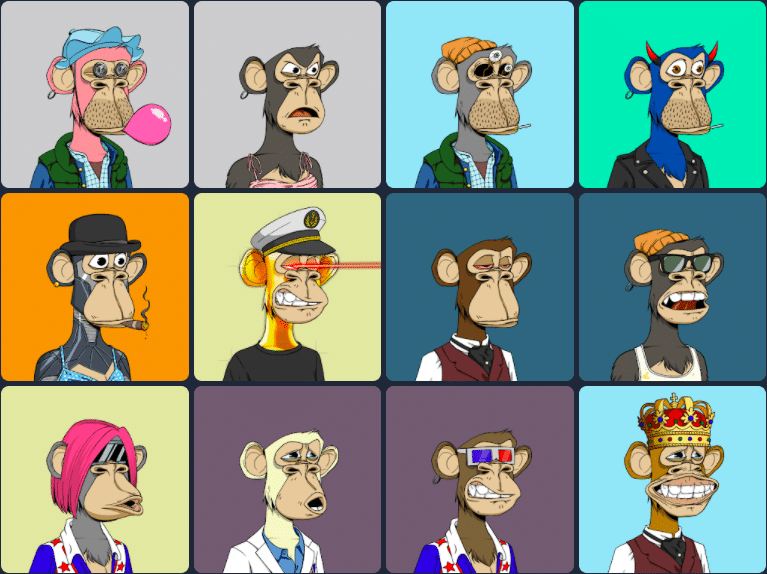 Yuga Labs, the publishers of BAYC, have come up with all sorts of ways to keep BAYC owners engaged. For example, they developed another coin, the ApeCoin (APE) , which is not an NFT but a fungible token, some of which was distributed to owners of the BAYC NFTs.

These tokens are the cornerstone of an APE-DAO and an ecosystem yet to be developed by Yuga Labs around NFTs, monkeys and virtual worlds – the Metaverse. APE are one of the few successful new tokens in recent months.

Now Yuga Labs followed up with the Otherdeed-Mint at the weekend. Avatars already existed, and fungible tokens already exist. What was still missing are NFTs that represent the country and items in a virtual world.

Yuga Labs created the virtual world Otherside for this purpose: “The metaverse should be anything but boring. The world should be dynamic, flavored with stories, and your actions should have consequences. Enter the Otherside, where normal rules no longer apply.” The Otherside is “part Galaxy and part Archipelago, where islands stretch from the Biogenetic Swamp toward the center and stretch into the Infinite Extent…”

In this world, there are multiple types of land to build on (or not to build on), numerous environmental elements, resources to find and mine, rare items to collect, and much more.

The Otherdeeds in question are now titles to land in Otherside (the pun is more understandable in English where “title deed” means title deed). They are “your key to the Otherside. Otherdeed owners can participate in creating prototypes or demos and help shape the final design of the game. Each Otherdeed is also a dynamic NFT, formed as a collection of elements […] and will evolve […]”.

An embossing with strict rules

On May 1st, these deeds were minted on the Ethereum blockchain. The minting rules were remarkably clear and strict: to create an Otherdeed, you had to pay 305 ApeCoins. Incidentally, this application has raised the price of ApeCoins from 17 to a good 24 dollars over the past week; after minting, however, it fell again to about $15.

YugaLabs set strict limits per wallet. At first you could only create two other deeds with one wallet, later the number should increase by four more. In order to participate in the minting, you had to have your wallet verified with Blockpass beforehand . Blockpass verifies the identity of wallet owners and creates a KYC (Know Your Customer) ecosystem, certainly in an innovative way, maybe also through KYC tokens, but I didn’t find that out quickly.

In addition, owners of a BAYC or MAYC NFT (Mutant Ape Yacht Club) can claim one Otherdeed per NFT. You do not need a wallet verified by Blockpass for this.

Despite these strict limitations and requirements, the Otherdeeds mint has become the biggest event yet on the Ethereum blockchain of 2022. On Twitter, YugaLabs feels compelled to explain itself.

We wanted to say a few words about the mint tonight. 🧵

“We recognized that the Otherdeed mint is a uniquely large, high-demand NFT collection and that this would present unique challenges.” The editors had hoped to adequately address these challenges through “a rigorous gating mechanism in the form of on-chain KYC, the maximum minting of 2 [tokens]per KYC wallet, and a significant price of 305 ApeCoins”.

But these measures could not prevent the Otherdeed Mint from “becoming the largest NFT mint in history in several ways.” And “the gas consumed during minting” – meaning the fees at Ethereum – “shows that demand far exceeded wildest expectations. The range of the imprint was so far that even Etherscan crashed.” 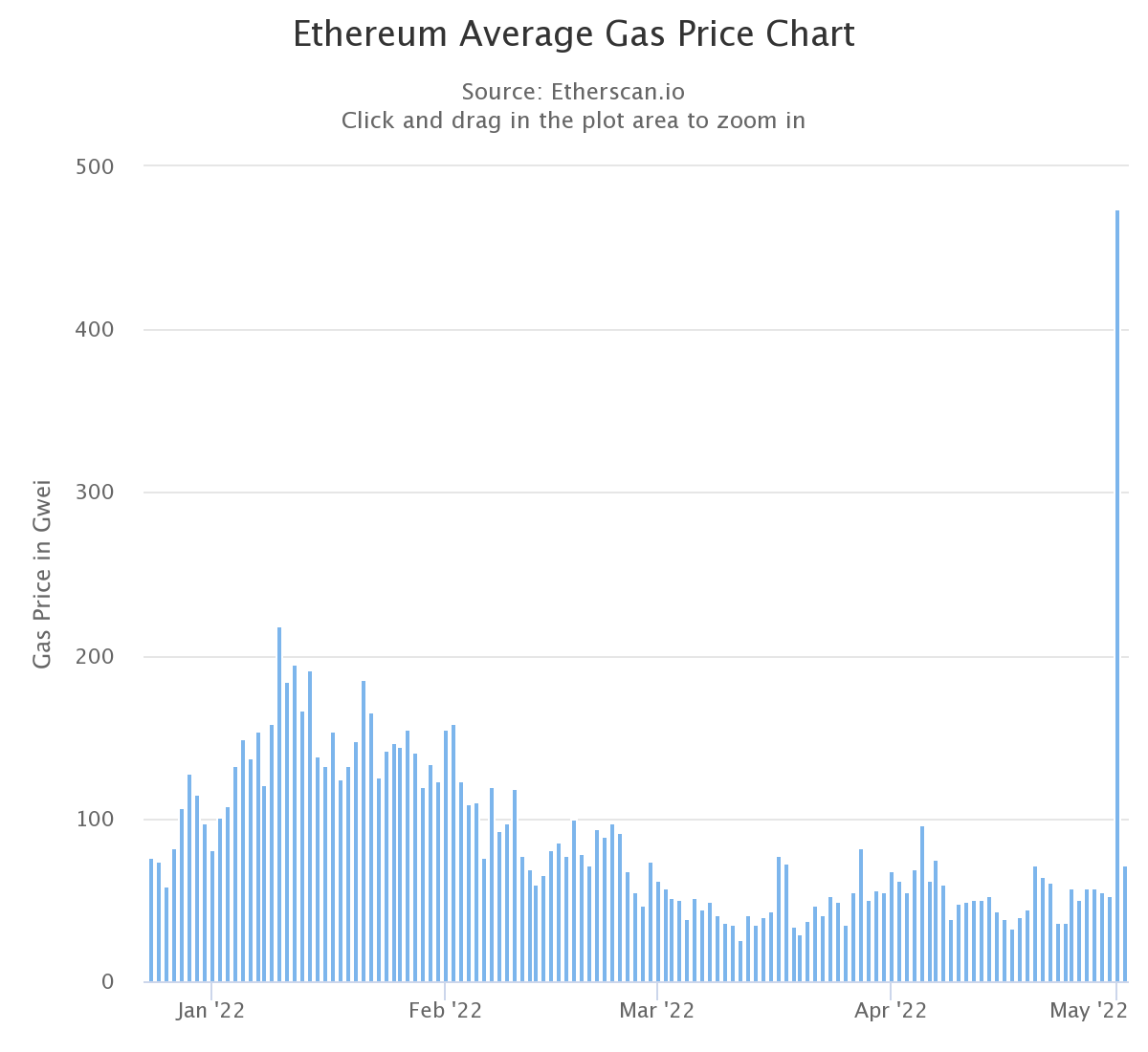 he spike in gas prices on the far right shows that a special event happened. Source: etherscan.io

Etherscan is the oldest and largest block explorer on Ethereum. An institution and authority. A lot has to happen for it to collapse. While Etherscan’s charts show an event that is clearly visible but unprecedented only for the year to date, the fees paid speak a clearer language: In just a single hour, the Otherdeed smart contract has 26,000 ether – $72 million – in gas burned. There have been reports of thousands of dollars in short-term fees for interacting with smart contracts.

The Otherdeed contract has burned nearly 26,000 ETH ($72m) in gas within one hour of minting.

Since the last hard fork , EIP-1559 destroys some of the ether that users pay as fees instead of going to the miners, causing the total number of ether tokens to grow less or even decrease. And such an amount of ether burned is actually unprecedented. So there’s a bit of pride when YugaLabs apologizes for the annoyance: “We’re sorry that we temporarily turned off the lights on Ethereum.” 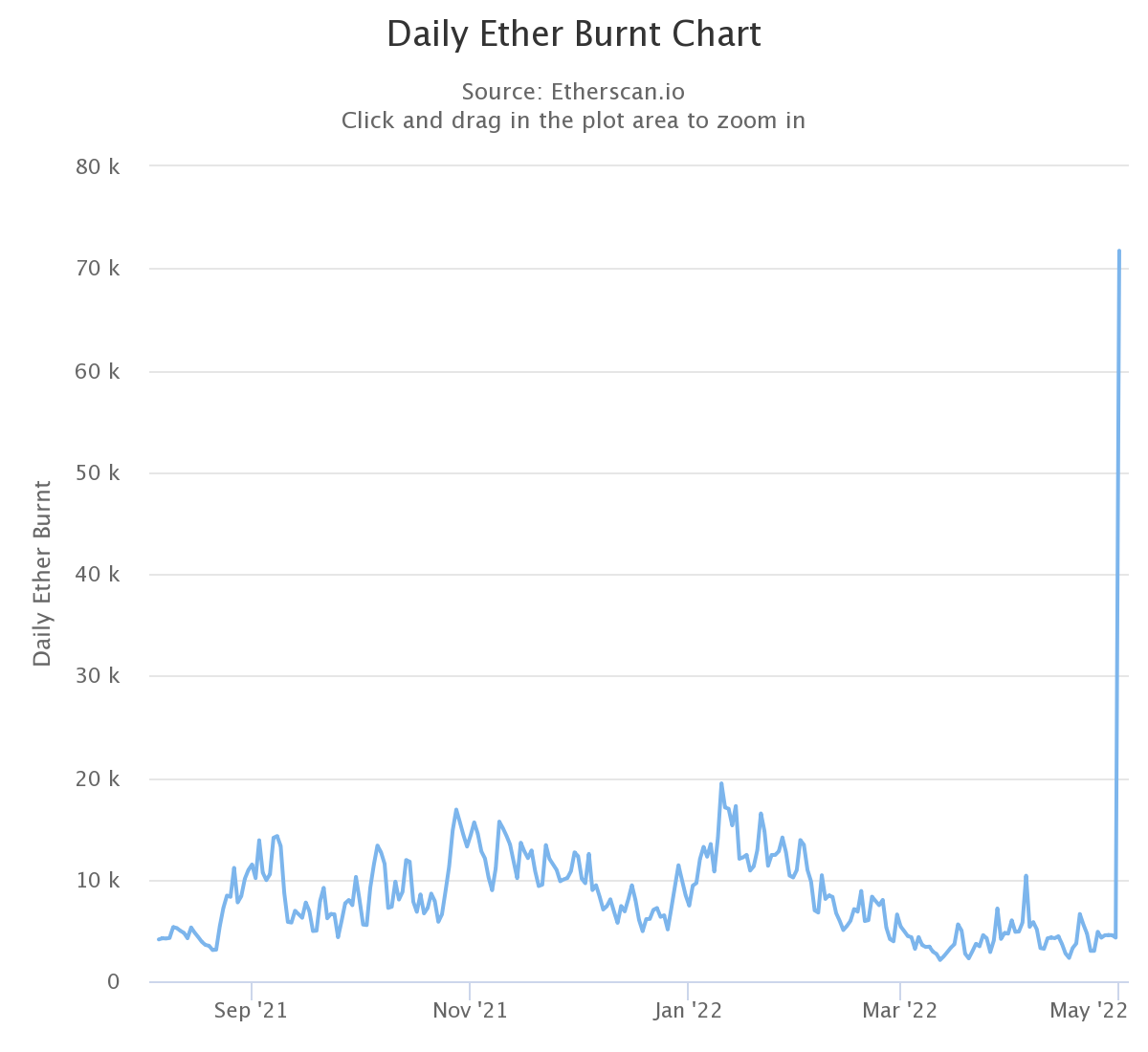 …but it’s not until the amount of ether burnt that it shows HOW special the event was. Source also etherscan.io

The incident makes one thing very clear: “ApeCoin has to migrate to its own chain in order to scale properly. We want,” the developers address the Ape DAO, “to encourage the DAO to think in this direction.”

But first, YugaLabs wants to take care of what happens to all the failed transactions, such as replacing the fees that users paid without the smart contract being triggered. You just have to do everything you have to do when you have created the most successful NFT mint of all time.