Core Scientific, the largest US miner, stops making payments to creditors. The company has divested its bitcoin reserves, the share price has fallen by around 90 percent, and the mining itself remains highly unprofitable. Is Core Scientific just the harbinger of a full wave of bankruptcies in bitcoin mining?

Barclays gave three dollars as the target price for the shares of the Texan company, which operates numerous mining farms in the USA. Today, the stock is at 19 cents a share, and Barclays is cutting its target price by 92 percent to 25 cents.

Last week, Core Scientific warned the US Securities and Exchange Commission of a possible bankruptcy . The company’s liquidity has been severely affected by the price of Bitcoin, rising electricity costs, rising hashrate and Celsius’ bankruptcy.

These unfavorable circumstances have been plaguing the company all year. In August, it reported that it had made a loss of $861.7 million on revenue of $164 million in the second quarter of 2022. Since late summer, the unfavorable combination of cheap bitcoins and expensive kilowatt hours has been seriously draining capital reserves. At the end of September, Core Scientific owned 1,051 bitcoins and $29.5 million in cash. Today it is 24 bitcoins and $26.6 million.

Management is trying to cut costs but can’t help but suspend payments for late October and early November. So, the miner is temporarily insolvent, and if he fails to raise capital quickly, he will go bankrupt completely. Core Scientific estimates that available cash reserves will be depleted by the end of 2022 “or sooner”. It is difficult to predict when “normalized operating income” can be expected again, as this depends on the unpredictable development of electricity and Bitcoin prices.

As early as September, a smaller miner, Compute North, filed for bankruptcy. He was missing around half a billion dollars, which he owed to at least 200 creditors. However, Compute North is small relative to Core Scientific. With more than six and a half thousand bitcoins mined in the first half of 2022, Core Scientific was by far the largest listed miner; with a hash rate of 17.9 exahash per second, Core Scientific provided between 5 and 10 percent of global hash power at the time.

This crisis in the big mining companies is a direct result of the Bitcoin price falling below the cost of production for an extended period of time. Charles Edwards, who presented a method to calculate the production costs of Bitcoin at the end of 2019 , now says that the price of Bitcoin has been permanently and massively below the mining costs since May of this year.

The world’s biggest Bitcoin miner is going bust. This is what happens when Bitcoin trades below its production cost for too long. pic.twitter.com/Ri0yXqZIPs

Unless this trend reverses aggressively, the wave of bankruptcies among miners will continue. In order for the hash power of Bitcoin to be covered by profit, the price of Bitcoin must rise continuously in order to compensate for possible rising electricity costs on the one hand and the halving of the yield on the other. The next halving is expected in mid-2024. If the ratio of price and electricity costs does not level off by then and the fee income does not explode either, the profitability of mining will be reduced by half again.

In such a case, we would have arrived in uncharted territory in terms of game theory. “Honest” mining is no longer worthwhile. In its place, nation states could mine at a loss in order to exert geopolitical influence. Or criminal miners could boost their earnings by double spending, which could be relatively predictable and risk-free with the help of the Lightning Network. Finally, the strongest players could continue to remain marginally profitable via selfish mining attacks, which would increase their share of the hashrate – Bitcoin would centralize itself. 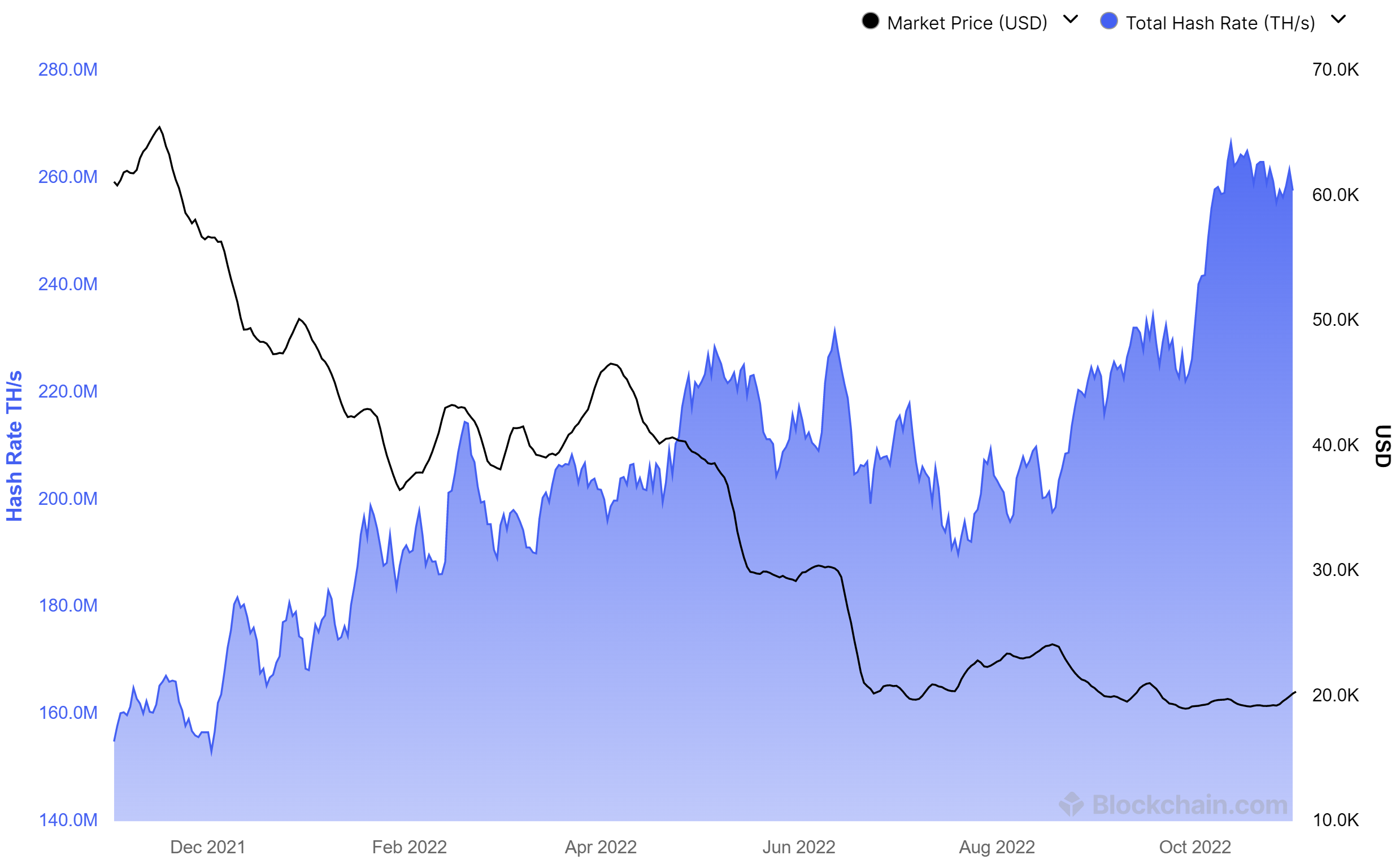 However, there is still little evidence of such tendencies. The miners are still plugging more and more devices into the network. The global hash rate only hit an all-time high on October 12, and has barely fallen from it over the course of October. The exact reasons for this are unclear. Some suspect that Russia is behind the massive hash power build-up as the country has a massive energy surplus but cannot export it due to sanctions. With bitcoin mining, Russia could transform its fossil fuels directly into money instead of going through the export of gas and oil or the production of goods.

However, this is also more of a theory that is not backed by reliable facts. As Charles Edwards’ chart shows, mining is still profitable if you calculate the pure electricity costs. These are represented by the bottom of the channel. It is not worth buying new mining equipment, but it is worth continuing to use existing machines. It becomes all the more urgent in view of the tight financial situation of the miners. Accordingly, it would now be expected that hashate would first start to grow more slowly and then decline when old devices die and are not replaced.